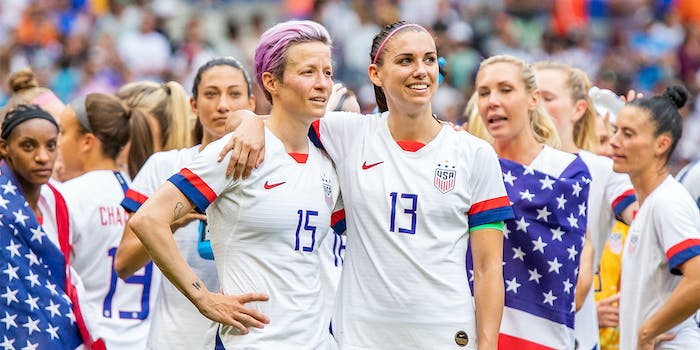 ‘Patriots’ on the right are thrilled that U.S. women’s soccer lost Olympic match

Their celebration of the team losing wasn't met well by people online.

In a stunning upset, on Monday, the United States’ women’s soccer team lost in the Olympic semifinals to Canada—and conservatives online are celebrating.

The right wing has taken issue with U.S. Women’s National Team (USWNT) for years. They especially seem to target their ire at Megan Rapinoe, one of the team’s most visible stars.

Rapinoe was among the first white female athletes to participate in anthem protests begun by Colin Kaepernick. She’s also criticized former President Donald Trump. In 2019, Rapinoe said that if they won the World Cup, she would not be “going to the fucking White House.” USWNT has also taken part in anthem protests of racial injustice.

None of this has gone over well with the crowd that complains about social media censorship and claims to champion freedom of speech.

Some on the right have been rooting against their own country throughout the Olympics. To them, USWNT’s defeat by Canada was cause for celebration.

“I have heard that it is difficult to score goals while your knee is on the ground,” a Twitter user commented. “Maybe they should stand and respect their flag and country next time.”

Similar comments flooded Twitter, primarily from accounts that describe themselves as American.

As many people pointed out, USWNT is far from the only team to protest racial injustice and discrimination by kneeling. Canada’s team has knelt before games during this Olympics.

Many suggested that cheering against one’s own team for exercising their free speech rights is the opposite of patriotism.

“If you rooted against the @USWNT because you’re upset at their protests you’re not a Patriot…no matter what you Twitter bio says,” one Twitter user wrote.

USWNT will play for the bronze medal on Thursday.