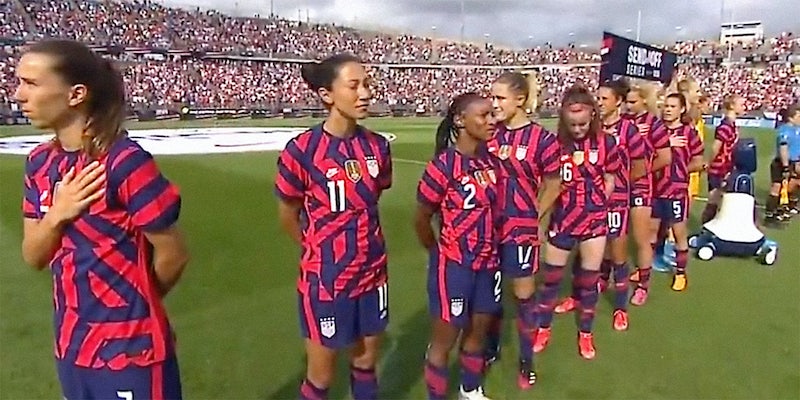 'That our audience is predisposed to believing things that aren’t true only proves how right we are.'

On Monday, the United States Women’s National Soccer Team (USWNT) was accused of protesting during the national anthem, which was played by 98-year-old World War II veteran Pete DuPré.

“Disgraceful behavior,” the Post Millennial howled, sparking a deluge of outrage throughout the right-wing ecosystem that is easily triggered by anthem protests.

“Embarrassing and disrepectful [sic],” tweeted Sean Spicer. “Proud Americans don’t turn their backs to men like Pete,” Republican congressional candidate Catalina Lauf snarled on Twitter. “U.S. turn away from national anthem,” the Daily Caller’s headline read. The Gateway Pundit raged, “These women should not be allowed to represent the U.S. at the Olympics.”

But, as others immediately pointed out, the team didn’t turn their back on the flag or on DuPré. Most of the players faced the flag during the anthem, and a few faced the same direction as DuPré, who is known lovingly known as “Harmonica Pete.”

“We turned because we faced the flag,” tweeted USWNT player Carli Lloyd in response to the Post Millennial.

U.S. Soccer’s communications department replied to the Post Millennial’s tweet within hours, writing, “No one turned their back on WWII veteran Pete DuPré during tonight’s anthem. Some USWNT players were simply looking at the flag on a pole in one end of the stadium.

“The players all love Pete, thanked him individually after the game and signed a ball for him.”

The Daily Caller, Post Millennial, and other right-wing media updated their stories to note the team’s denial and somewhat clarify their reporting.

But it was too late. The outrage machine had been set in motion.

As of Tuesday afternoon, social media users, including some high-profile conservatives, continued claiming that USWNT had participated in an anthem protest. “Liar,” said John Cardillo of the team’s denial.

“The guy fought for your freedom dummies!” tweeted AKUSA77.

Others on the right have acknowledged the error, but attempted to deflect the blame.

Conservative media’s attempt to vilify the team may have worked for some of its core audience, but elsewhere the outlets were widely condemned.

“Completely manufactured controversy, and the unwillingness of people on the right to admit they messed up is embarrassing,” Twitter user @spicyramen821 replied to the Daily Wire.