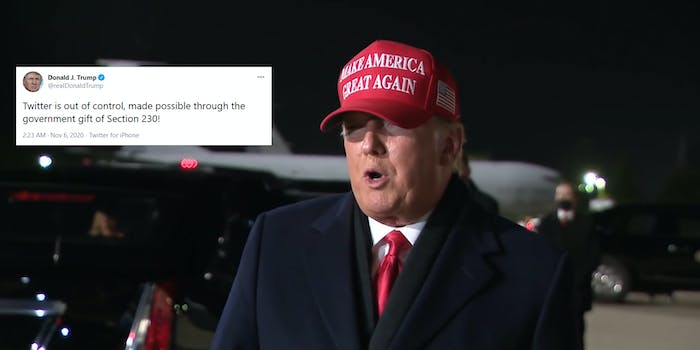 Trump is mad Twitter is correcting his election disinformation

President Donald Trump continued his attack on Section 230 of the Communications Decency Act, a vital internet law as he complained about Twitter labeling his misleading tweets about the 2020 election.

Trump’s tweets have been repeatedly labeled by Twitter—as have people within his orbit—for containing “disputed” or “misleading” information about the election, as the president tries to cast doubts on the integrity of the vote. The president has not offered any evidence for his claims.

Seemingly mad that Twitter has labeled more than a dozen of his tweets since Election Day, the president lashed out around 1:20am CT on Friday morning—calling the social media company “out of control” and blaming it on Section 230.

“Twitter is out of control, made possible through the government gift of Section 230!,” the president tweeted.

Ironically, Trump’s Section 230 tweet is one of the few of his tweets that haven’t been labeled by the company since Election Day and require users to click through a warning to view.

Section 230 is essentially a liability shield for websites. It blocks them from being sued over what is posted on them by third parties. It’s been called the “twenty-six words that created the internet” and “one of the most valuable tools for protecting freedom of expression and innovation on the Internet.”

It’s also the law that allows Twitter to permit Trump to post some of his more incendiary tweets.

Despite it’s importance, the law has been under fire from lawmakers on both sides of the aisle. Trump signed a social media executive order over the summer that targets Section 230 and asks the Federal Communications Commission (FCC) to “clarify” the provisions under which websites are granted the liability immunity.

The FCC controversially decided last month to move ahead with Trump’s order.

Meanwhile, former Vice President Joe Biden has also said he thinks Section 230 should be revoked, however his gripes with social media companies appears to be over the amount of disinformation on them.