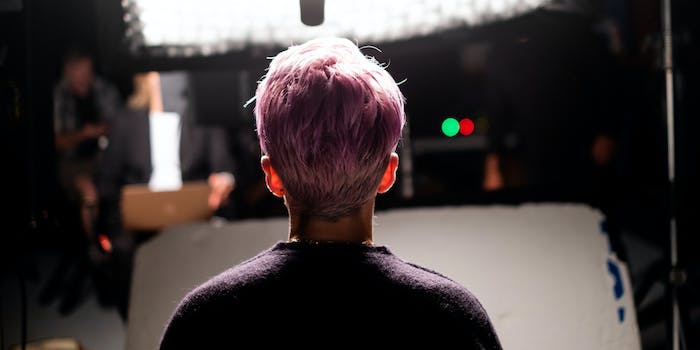 ‘LFG’ is an infuriating and flawed view into the U.S. Women’s Soccer team’s fight for equal pay

It reveals what happened behind-the-scenes over the past two years.

In March 2019, the U.S. Women’s National Soccer Team (USWNT), just months prior to what would become a dominating run at the Women’s World Cup, filed a gender discrimination lawsuit against the U.S. Soccer Federation. Fans around the world, fellow athletes, and politicians met news of the lawsuit with indignation, outrage, and support from the players, and the cry grew much louder after the team won its fourth World Cup title in a competition that was about the battle off the field just as much as it was on it; when the USWNT won the title, the world could hear the crowd chanting “Equal Pay!” amid the celebratory “U.S.A.!”

Release Date: June 24, 2021
Directors: Andrea Nix Fine and Sean Fine
Streaming: HBO Max
An infuriating view into the first year of the U.S. Women’s National Soccer Team’s gender discrimination lawsuit against its own employers—U.S. Soccer Federation—to be given the same pay and opportunities as their male colleagues. While it might not reveal anything we didn’t already know, it’s a stark reminder for USWNT fans of just what they’re still dealing with off the field as they’re about to re-enter the world stage at the 2021 Summer Olympics.
Advertisement Hide

As LFG (which is the USWNT’s rallying cry, “let’s fucking go,” in acronym form) shows, the reality of what the USWNT faced in its lawsuit over the next two years is much more depressing, infuriating, and for so many people around the world fighting against gender-based pay disparities, utterly familiar. While LFG is certainly a flawed and largely one-sided view into the USWNT’s fight, it’s also a stark reminder for fans and viewers alike of what these players have had to deal with off the field ahead of the Summer Olympics.

The USWNT argues that, in comparison to the U.S. Men’s National Soccer Team (USMNT), they are extremely underpaid because their base pay and bonus payouts based on merit are both significantly lower than what the USMNT are paid. According to the lawsuit, which all 28 players of the USWNT signed onto, the players estimated that they would’ve made over $60 million more over the past four years if they had been offered the same terms that the USMNT were offered.

Forward Jessica McDonald, who’s featured prominently throughout LFG and spoke first-hand how unsustainable the current salaries for players are, revealed that she made so little money as a professional soccer player that she had to take on another job as a coach to support herself and her young son; McDonald noted that she had friends who worked as servers who earned far more than she did.

But the arguments for the many, many disparities between how U.S. Soccer treats the USWNT and the USMNT goes beyond pay; it’s also about how funds and resources are relegated to the team, how they’re marketed, and even the type of field they play on. And despite all that, the USWNT and their lawyers argue with numbers presented in easy-to-read charts, the USWNT were watched by more people and its players made U.S. Soccer more money.

And the USWNT are far more successful than their male counterparts: The USWNT, which has four World Cup victories and four Olympic gold medals, are currently on a 42-match unbeaten streak whereas the USMNT (which has failed to qualify for both the Olympics and the World Cup in recent years) just won its first tournament trophy since 2017 after it defeated Mexico in the Concacaf final earlier this month. (For what it’s worth, the USMNT’s union released a statement in February 2020 that supported the USWNT and said that “the women were due at least triple what our expired deal was worth in player compensation.”)

As both LFG and the players emphasize, the fight for equal pay is far bigger than themselves or American soccer. Many women’s teams around the world have even less resources and funds than the USWNT do, and it’s a problem that goes all the way up to FIFA; the pay disparity of what’s awarded for the winning team during the 2019 Women’s World Cup ($30 million) and the 2018 Men’s World Cup ($400 million) is jaw-dropping. But the USWNT can’t take on FIFA for that pay gap—the players don’t get the prize money, the winning country’s soccer federation does—so, the players are setting their sights on their employers instead.

LFG quickly takes us through the first few months of the lawsuit, as well as the USWNT’s utter domination at the Women’s World Cup, a fight that took on new meaning and won much of the world on its side. But despite the ratings, initial platitudes, and a bit of naïve hope, U.S. Soccer revealed it would pull out all of the stops and whistles to fight the lawsuit, even going as far as to suggest that the players shouldn’t be paid more because they’re biologically inferior to the male players, who have a more demanding job. (U.S. Soccer, faced with backlash from its players, fans, and sponsors, eventually apologized and its president resigned.)

The U.S. Soccer Federation declined to give any on-camera interviews, a fact that is stated upfront before we’re shown any footage, so the arguments that LFG put forward are one-sided. If there’s a nuanced argument to be made against the lawsuit, it’s not one that LFG gives. (Then again, chances are that whatever your stance on the fight for equal pay was beforehand, it won’t change after watching it.) The players’ lead legal counsel Jeffrey Kessler does acknowledge one counterargument from U.S. Soccer that some of the women made more money than some of the men. But Kessler added that only further proved the necessity for the lawsuit: For the women to make more money than the men based on their current contracts, the USWNT had to be exceptional.

Some of the storytelling feels opaque by the very nature of itself. It’s an ongoing lawsuit, so some of the meetings and discussions you’d hope to hear happen where cameras aren’t allowed or are protected by client-attorney privilege. It’s a story without a resolution because while the USWNT and U.S. Soccer eventually settled the working conditions aspect of the lawsuit; they’re still fighting over equal pay, which the team is appealing after a judge threw out that aspect of the lawsuit back in May. The storytelling is undermined by some of its music choices, and the narrative is a little all over the place.

But one of the more images of LFG is how it shows the toll it takes on the team. The original lawsuit included 28 members, and whenever something came up, all 28 of the players always had to agree on the direction the lawsuit went, something that, for some of them, was something like yet another job they had to do; sometimes, they had to coordinate in the middle of the night when they were spread out all across the country. When an update occurs, they have to coordinate a response, whether it’s a media blitz, a response to an open letter, or a protest on the field after being disrespected by their bosses. While that toll is mostly unspoken, that labor takes a toll; at one point, Christen Press suggests to Rapinoe (who’s often the face of the team and the lawsuit) that she should slow down. The attacks eventually become personal.

Rapinoe acknowledged that she most likely won’t be around to experience all of the changes that she and the rest of the USWNT are fighting for. “We’re not just fighting for soccer glory, we’re also representing what women can be when given a certain platform,” team captain Becky Sauerbrunn explained. “And anything less than winning is a failure.”

With so much going on, it’s possible that many of the people initially invested in the lawsuit may have stopped paying attention in the two years since it was first filed. But both LFG, which, perhaps not entirely coincidentally, debuts a month out from the Tokyo Olympics, and the Olympics themselves will put the lawsuit back into the spotlight. Next month, we’ll see the USWNT argue both on and off the field for just why they deserve much more. And if the USWNT wins it all in a tournament that their male colleagues didn’t even qualify for? It makes their case even stronger in the court of public opinion.

LFG debuted at the Tribeca Festival on June 17. It is now streaming on HBO Max.