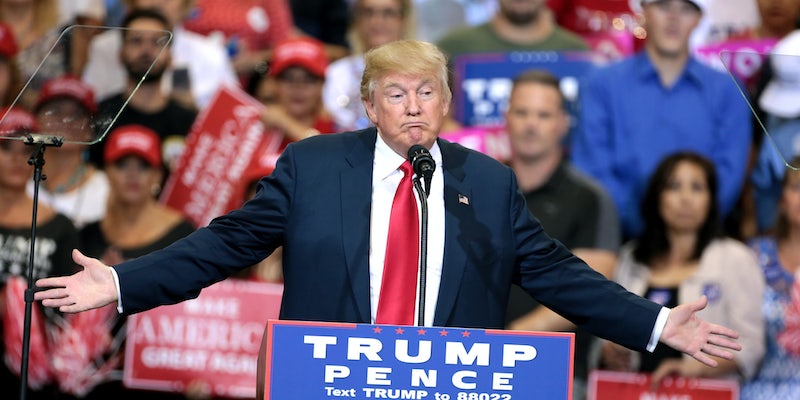 Last month Trump said he would invite the team 'win or lose.'

President Donald Trump appears to be backtracking from his defiant claim that he would invite the U.S. Women’s National Soccer Team to the White House no matter what in the wake of the team’s World Cup win on Sunday.

Last month, Trump responded to comments made by U.S. Women’s Soccer star Megan Rapinoe who said she would not be “going to the fucking White House” if invited after a World Cup win.

In response, the president said that he would invite team “win or lose” and said Rapinoe should “should WIN first before she TALKS!”

After the team’s 2-0 victory over the Netherlands on Sunday, it would stand to reason that an invitation would be offered to them—a tradition among championship winning teams in U.S. professional sports.

However, according to USA Today, Trump’s tune has changed.

“We haven’t really thought about it. We’ll look at that,” the president told reporters on Sunday.

Trump did tweet about the team’s win on Sunday, noting that the country was “proud of you all.”

Congratulations to the U.S. Women’s Soccer Team on winning the World Cup! Great and exciting play. America is proud of you all!

As the Washington Post notes, U.S. Coach Jill Ellis was asked about a potential invitation from Trump following the team’s win.

“I don’t know. I haven’t been invited, so I can’t really say,” Ellis said, adding when pressed about it likely happening: “Well, I wouldn’t bet on that.”