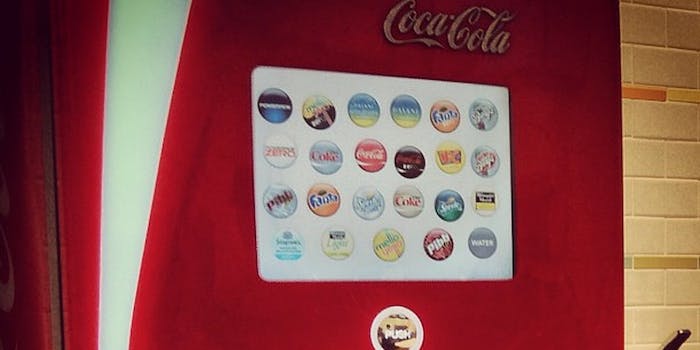 Coke is spying on your drink preferences like a tasty, sugary NSA

Your orange-berry Sprite could be the new flavor sensation.

You know those fancy new “freestyle” soda machines at some fast food restaurants that let you fill up with custom flavors? Well, they’re connected to the Internet so the Coca-Cola company can track what flavor combinations you’re trying.

To that end, the Coca-Cola company has stockpiled unique network identifiers that are “usually reserved for Wi-Fi cards and other networking equipment,” according to a recent story in Wired.

It now owns 16 million of the unique network IDs. While that’s actually the minimum block of IDs a company can reserve at a time, it’s a typically a networking equipment manufacturer that makes such a purchase, not a soda company. Coke acquired these addresses in 2010 and it’s finding plenty of uses for them. In addition to the “freestyle” soda fountains already in more than 2,000 restaurants, Coca-Cola is testing Internet-connected vending machines.

Using real-time tracking, Coke will be able to see which sodas are purchased most frequently for research into consumer activity and to more accurately refill supplies at various restaurants. The company could see which arrangement of options on each machine increases the chances of someone buying.

Connected machines can also process credit cards and mobile payments, keeping customers from passing up a cold, fizzy drink if they don’t have the right change.

It’s possible Coca-Cola could use its flavor tracking in its “freestyle” machines to create a whole new product. It’s a longshot, but orange-spiked root beer could have its day in the sun.