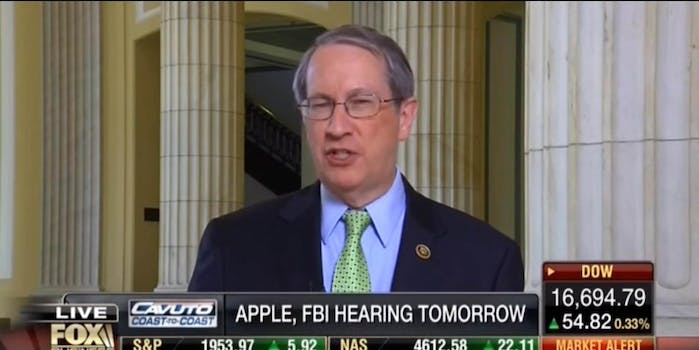 'Strong encryption is a really, really good and important thing.'

Ahead of Tuesday’s congressional hearing on the battle between Apple and the FBI over unlocking a terrorist’s iPhone, a top Republican congressman criticized the FBI’s approach on Fox News.

“Strong encryption is a really, really good and important thing, because when you see businesses, banks, government agencies hacked, what [the hackers are] doing is getting around the encryption protecting those pieces of information,” said Sen. Goodlatte (R-Va.), chairman of the House Judiciary Committee.

The Committee will hear testimony from both sides of the “Apple vs. FBI” debate on Tuesday morning. FBI Director James Comey and Bruce Sewell, Apple’s senior vice president and general counsel, are scheduled to testify during the hearing.

“Having keys out there into whose hands we don’t know are going to fall is an issue,” the lawmaker argued.

Goodlatte also warned that encryption keys could fall into the wrong hands, potentially jeopardizing the security of innocent people—thinking that aligns with what Apple will testify on Tuesday.

“The FBI is asking Apple to weaken the security of our products,” Sewell will tell the Committee, according to his prepared remarks. “Hackers and cyber criminals could use this to wreak havoc on our privacy and personal safety. It would set a dangerous precedent for government intrusion on the privacy and safety of its citizens.”

Goodlatte said that changes in technology pose problems for law enforcement but added that the authors of the All Writs Act, which is the 220-year-old law the court is using to order Apple to hack its own phone, “never contemplated anything like this.”

“Boycotting Apple, or defeating strong encryption, or doing things that don’t keep us on the track to make people’s data of all kinds—financial, medical—safer is not the solution,” Goodlatte said.

While Tuesday’s hearing is an important moment in the ongoing encryption debate, it is only one pixel of the larger picture depicting the balance between privacy and security.

In the courts, where Apple is currently moving to vacate the FBI’s order, dozens of tech firms like Google and Facebook have filed in support of the iPhone maker.

In the court of public opinion, the picture is still coming into focus, according to recent polls.