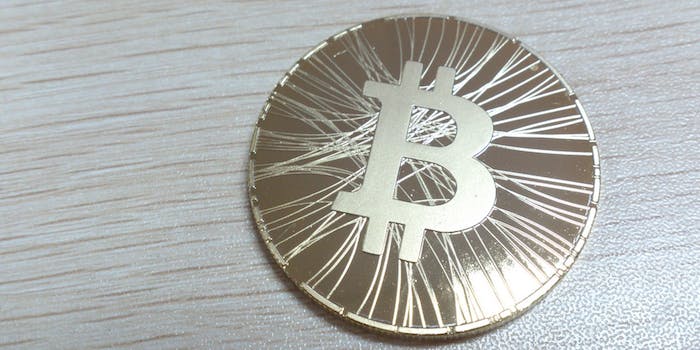 After declaring bankruptcy and shutting down its site in February, Mt. Gox, once the world’s most active Bitcoin exchange, appeared to be gasping its final breath. Now, an investment group wants to buy the company and resurrect the embattled Bitcoin exchange. Their offer? One bitcoin.

John Betts, who formerly worked for Goldman Sachs and Morgan Stanley, would serve as the chief executive of the new firm. The investment group also includes Brock Pierce, an entrepreneur and former child actor (of Mighty Ducks fame), as well as venture capitalists William Quigley and Matthew Roszak.

The group cited a lack of information concerning 550,000 of the stolen bitcoins as justification for the low price, which equals just over $400, at the time of this writing. A Japanese bankruptcy court must approve the deal before it can move forward.

If the deal goes through, the investors hope to set aside 50 percent of the transaction fees in order to pay back customers affected by the bankruptcy, according to documents reviewed by the Wall Street Journal.

Last month, Mt. Gox claimed to have found 200,000 of the bitcoins reportedly stolen in an old wallet they originally assumed was empty. Creditors have the option to receive prorated payment from the 200,000 bitcoins or an equivalent amount in the form of a new exchange.

Even with the chance to resurrect Mt. Gox, the high profile coverage of Mt. Gox’s downfall resulted a tarnished reputation for the company, which had a history of technical difficulties. One study found that the more people knew about bitcoins, the less they trusted them, and another reported that Mt. Gox’s claims about what happened to the company aren’t true.

Mt. Gox CEO Mark Karpeles was ordered early this month by a U.S. judge to appear before a Dallas court, as part of his company’s attempt to file for Chapter 15 bankruptcy protections.

It remains to be seen if the court will approve the deal, but in any case, those involved have a long road ahead of them.