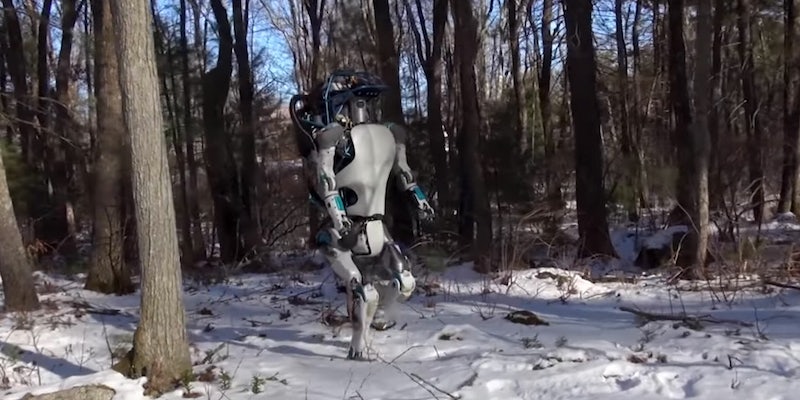 Nowhere is safe from these cute machines.

We regret to inform you that the Boston Dynamics robots, the dog-looking machines that terrified Twitter with their ability to open doors, can now hunt you down in the woods.

Well, specifically it’s the bipedal humanoid robot that will be doing the hunting, as this video from Mashable shows.

Boston Dynamics robots can now run in the woods, jump over obstacles and autonomously navigate a building pic.twitter.com/nE2n0vj9w2

The robot, nicknamed “Atlas” (because that’s what I’ll be thinking of as it sets its sights on me), is seen taking a brisk jog through an open field outside a rural home next to the woods. Atlas is able to gently jog up a slight incline and evidently deal with the uneven terrain. He certainly takes it at a better pace than your average mall walker.

Atlas was also able to efficiently jump over a medium-sized log in his path, complete with the awkward arm movements we all do when we’re trying to balance.

Boston Dynamics also took some time to show off SpotMini (the same dog-like robot who can open doors), who can now navigate the Boston Dynamics office all on his own, as well as climb and descend a flight of stairs. That’s right, the robot that can open doors can find you when you hide in the bathroom to eat your lunch in peace.

If you want to get your hands on your own totally-not-a-Terminator from Boston Dynamics, here’s good news: The company is aiming to sell copies of the SpotMini as early as 2019. No word on what it’ll sell for, but early versions of Atlas cost upward of $1 million, according to Boston Dynamics founder Marc Raibert.

If you’re feeling a little jittery after watching these incredibly lifelike robots, you’re not the only one. Black Mirror creator Charlie Brooker said that the metal dogs in the episode “Metalhead” were based explicitly on the SpotMini robot.

Regardless, it’s important to stave off the robot apocalypse with some goodhearted jokes.

Don't worry guys, I got this pic.twitter.com/RLXpM4VpZp