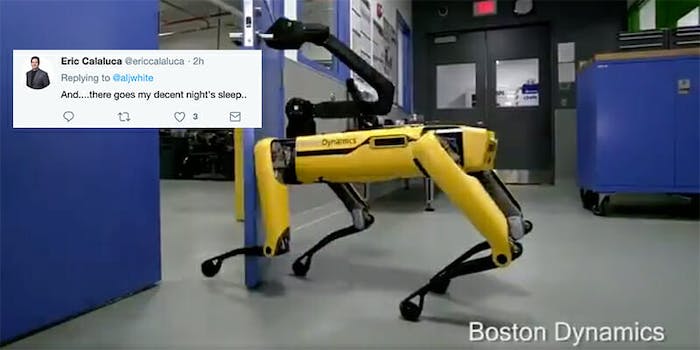 Robotics company Boston Dynamics posted on Monday a video of its SpotMini—a so-called quadruped robot with four limbs to walk on and an arm with a clamp atop—extending a “hand” to turn a handle and open a door. The SpotMini then politely holds the door for another robot to walk through.

This is one of the most terrifying things I’ve seen in all my life pic.twitter.com/Yp9xlhdKC9

It’s easy to think of all the worst-case scenarios, especially in light of every robot thriller film ever.

In the plus side, it takes two of them to open a door. On the minus side they are now INSIDE YOUR HOUSE

The robots reminded people of some certain CGI dinosaurs.

Ugh. Only a matter of time before we're living through Black Mirror's "Metalhead" episode. pic.twitter.com/fSVyHTWAXO

But horrifying apocalypse foreshadowing aside, people on Twitter had plenty of jokes about the real-life robots.

What breed of puppies are those?

Even “bare minimum Twitter,”  thrilled with the robot’s chivalry, made an appearance.

And for anyone that’s not so jazzed on the idea of a door-holding robot, the good news is that the older version of the technology still works just fine.

Don't worry guys, I got this pic.twitter.com/RLXpM4VpZp