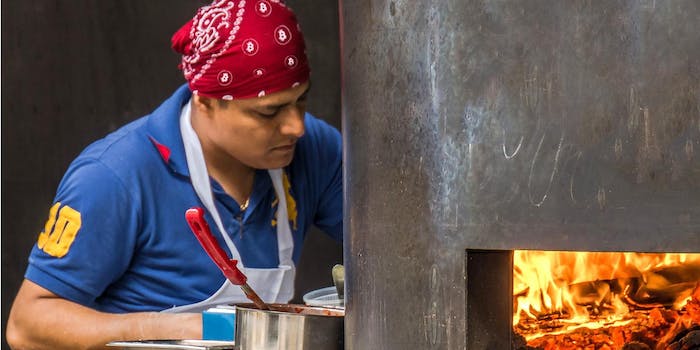 What could pizza have done? Pizza is innocent.

Sandra Alhilo, a 37-year-old mother of two, only had a vague knowledge of Bitcoin when the extortion letter came.

“I remembered the… Spice Road?” she told the Daily Dot. “The drug thing.”

It’s actually the Silk Road she was thinking of, the Deep Web marketplace where you can buy all sorts of illegal goods, and where the online-only Bitcoin is the currency of choice. But the point remains: The second time Bitcoin came to her attention, it was in the form of a letter that arrived June 16 to Pizza Pirates in Pomona, Calif., where Alhilo is the general manager.

“I started laughing,” Aliho said. “It looked like junk mail on the outside.”

The tone of the letter, however, is dead serious. “Your business,” it begins, “has been targeted for Extortion [sic].” It goes on to name the list of things the anonymous criminal will do if the business doesn’t pay up: negative online reviews, calling in bomb threats, calling the cops and saying the company’s running a meth lab or training terrorists. To avoid this, it says, simply send over a single Bitcoin (worth around $600 these days). The letter’s recipient is directed to Coinbase, a popular cryptocurrency exchange, to purchase the digital money.

A friend of Aliho quickly posted the letter to Reddit, then got cold feet and deleted the thread. But copies spread on Twitter and were reposted back on Reddit. Then other copies of the same letter started cropping up. Then other businesses across the U.S., so far all independent pizza places, started reporting receiving the same letter

Because of the nature of Bitcoin, there’s no way to tell who owns the wallet that the company set up to ask for money. The wallet itself is visible for anyone to see, however. It’s only received two tiny transactions, presumably to test it out. So far, no one has paid it 1 BTC as an extortion ransom.

Pizza Pirates is the earliest known recipient of the letter, but it’s not the only one. Grand Rapids Pizza and Delivery, based in Michigan, got it too. It came with a different wallet address, which seems to be invalid, but is otherwise identical. “They’re [trying to take our] lunch money, and we’re not going to let them,” owner Mike Raymond told local news outlet Wood TV.

Another pizza joint, New Hampshire’s 900 Degrees Neapolitan Pizzeria, got the same thing. “This is a new one on me, you guys,” 900 Degrees’s official Facebook page wrote on its wall. “What the heck is a BitCoin??”

Alhilo said that she contacted the postal inspection service for an investigation. “We have no intention of paying this,” she said.