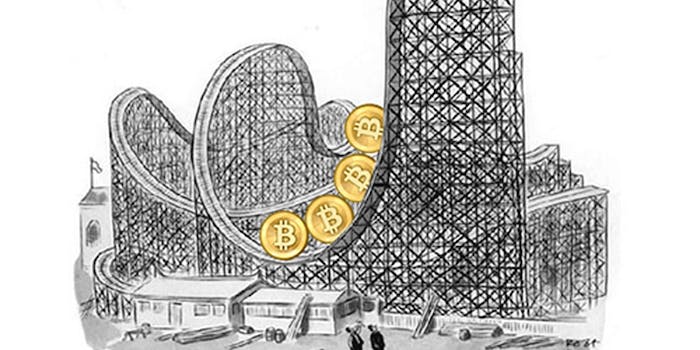 Here’s a detailed look at the rise, fall, and resurgence of the unregulated digital currency.

Bitcoin continues to grow at a ridiculous rate. The unregulated digital currency has moved from $0.14 in the year of its birth to over $100 today, due in part to recent convulsions in the banking sector in Cyprus and other factors.

In a matter of months, bitcoins have gone mainstream. Banks have been announced to facilitate the movement of the currency, online businesses have agreed to accept it for payments, ATM plans have emerged, and it’s become a talking point for international media.

Here’s a look at the rise, fall, and resurgence of the revolutionary currency.

Pseudonymous programmer, or group of programmers, Satoshi Nakamoto publishes the details of Bitcoin and solves the double-spending issue to keep currency uncopyable. (PDF)

Bitcoin system launches, replete with new currency generation system that will result in 21 million bitcoins over the years, to end in 2040.

First Bitcoin transaction said to take place when a Florida man, Laszlo Hanyecz, sends 10,000 bitcoins to a volunteer in the U.K., who calls a Papa John’s pizza and has them deliver a pizza to Hanyecz’s house.

Vulnerability in the system is discovered (improper verification of bitcoins) and exploited, generating 184 billion bitcoins. It’s later discovered and erased, and the system is transferred to an updated version of Bitcoin.

Inter-governmental Financial Action Task Force publishes paper (PDF) warning of the use of digital currency as a financial mechanism by terrorist groups.

WikiLeaks begins accepting donations only in bitcoins, after being dropped by banks and other payment services, like PayPal, the previous year.

The first Bitcoin bubble pops, falling from over $30 to about $10. Then, over the next several months, it declines to under $3.

Owner of Bitomat, the third largest Bitcoin exchange, loses Bitcoin wallet and the 17,000 bitcoins it held for clients.

MyBitcoin hacked, loses its clients 78,000 bitcoins, 51 percent of its their deposits.

Reddit announces its consideration of the currency, delighting the site’s so-called Bitcoin strippers.

Leaked FBI report uncovers government and law enforcement fears of Bitcoin as a tool to facilitate the sales of drugs and weapons and assist terrorist.

Bitcoin Savings and Trust shuts down, leaving $5.6 million in debt outstanding; SEC investigates it as a Ponzi scheme.

Bitfloor exchange hacked of 24,000 bitcoins, closes down temporarily then restarts with promise to pay clients back a loss of about $250,000.

You can now buy pizza from various companies, including Pizza Hut and Dominos.

Canadian puts his house on the market for bitcoins.

Another company plans Bitcoin ATM, to debut in Cyprus.

Bitcoin breaks $100 exchange rate for the first time as total value for the currency tops $1 billion. It currently trades $141.32, according to Mt.Gox.