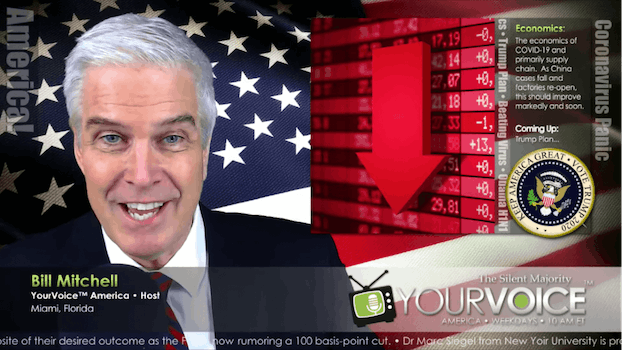 He wants his diarrhea check, and he wants it now.

The American economy is struggling, which is an impersonal way of saying the American people are struggling. Workplaces are shutting down, independent contractors are having trouble finding gigs, and parents who could otherwise work can’t with schools closing and kids stuck at home.

It’s a no-brainer to most people that as long as the country is in various stages of a shutdown while we try to stop the spread of coronavirus, folks are going to need financial support in order to stay afloat. Because if people lose everything, well, our economy won’t be bouncing back any time soon.

But some folks just either can’t deal with the thought of anyone (except CEOs and corporations) getting “free” money from the government, or absolutely refuse to believe that COVID-19 is an actual threat.

Noxious right-wing troll Bill Mitchell, an ultraconservative Trump acolyte perhaps best known for conning supporters into paying for his move to Miami, has been very vocal about his opinion that the coronavirus isn’t a big deal.

In one recent viral tweet, he wrote: “Diarrhea kills 1.8 million a year. ONE POINT EIGHT MILLION. Where’s my diarrhea check?”

Any thinking person understands the upcoming $1,200 stimulus checks are happening because COVID-19 is putting people out of work, not specifically because the disease itself kills people. While we don’t know exactly what the fatality rate will be yet, the fact that it lands some patients in the hospital to spend one-to-two weeks on a ventilator could easily overwhelm our healthcare system and is already doing just that in some locations.

It didn’t take long for people to start dunking on Mitchell’s purposeful obtuseness.

Others tried to correct him with facts, but everyone knows Mitchell has never been interested in those.

Mitchell is one of a growing number of Republicans who seem to believe opening up the country again and risking countless lives is worth the gamble that it could help the economy bounce back, rather than just cause an exponential increase in infections.

Unfortunately, letting those who want to go back to work do so would allow the coronavirus to spread more freely among communities, and put those deemed essential workers at a higher risk. Which is to say, we can’t just allow these selfless Americans to sacrifice themselves for the economy while the rest of us try not to get our grandparents killed.

Weirdly enough, that’s a dilemma no one suffering from simple diarrhea has ever had to consider.