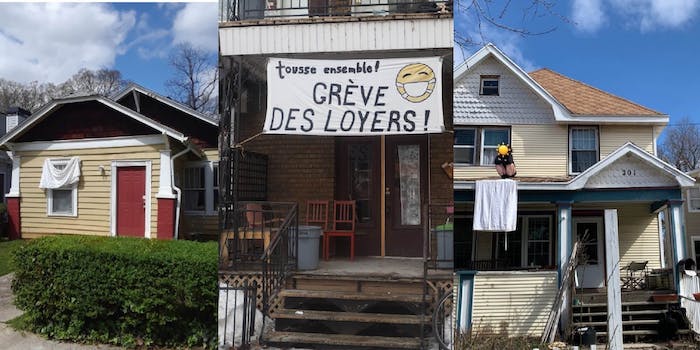 People are hanging white sheets from their home windows as part of a rent strike amid the coronavirus.

For many, it will be difficult or impossible to pay rent for April. That’s when renters in Montreal began hanging white sheets from their windows to signal that they’re participating in a rent strike. Since the movement started in Canada, it’s now spread to several U.S. cities including Los Angeles, New York City, Chicago, and Atlanta.

“I know a lot of folks are feeling hopeless, but there are ways we can organize to fight for our demands,” reads a caption on one of the white sheet pictures. “Everyone has a white sheet lying around at home, it’s subtle, and it helps our neighbors know we’ll stand with them.”

People participating in the strikes are demanding no rent until they receive pay again.

President Donald Trump’s announced that the government is temporarily suspending all foreclosures and evictions until next month. However, the general advice for renters is to work out a payment plan with their landlords or turn to their banks for a short-term loan.

Strikers say that’s not good enough: People shouldn’t have to worry about loans during a pandemic. The phrase “no rent, no bills, no loans” began making its rounds on social media.

Goldman Sachs economists estimate that about 2.25 million people will be out of a job because of the coronavirus, according to Al Jazeera. It’s unclear whether Trump will extend his earlier announcement.

In the meantime, the coronavirus rent strike continues to spread throughout the country.