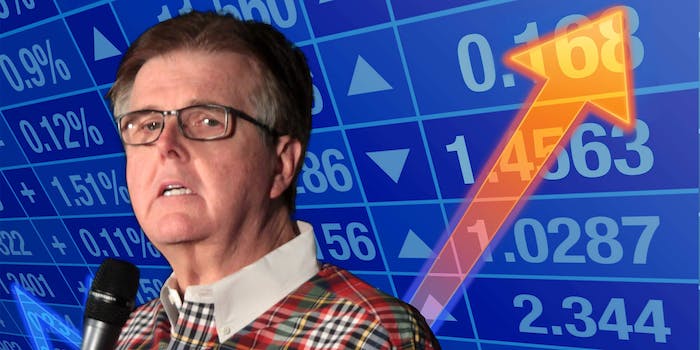 Would you die for the Dow?

At last night’s White House press briefing about the coronavirus pandemic, President Donald Trump expounded on his Sunday tweet, where he said that we “can’t let the cure be worse than the problem.”

Despite expert warnings that a two-week lockdown (which isn’t even being fully implemented nationally) is not enough to halt the spread of the coronavirus, Trump said that he wanted to reevaluate things after that time was up (reasonable) and get people back to work, possibly reopening schools as well (which is less so), so that the economy could keep going.

It’s a strain of thinking that is growing in conservative circles.

The sentiment appalled a lot of people, because essentially what the president was saying is that we need to accept some level of death to keep the stock market from completely cratering.

Trump did not put it in such glaringly explicit terms. But Texas Lt. Gov. Dan Patrick (R) did, going on Tucker Carlson’s Fox show and saying we need to get back to work now, level of death be damned.

In the interview, Patrick said senior citizens needed to take a “chance” on their survival to keep America the way it is.

But keeping things the way it is, in Patrick’s mind, would require a sacrifice that Republicans are keeping in abstract terms—what level of danger to the public is worth the economy still going.

On Twitter, that manifested in the hashtag #NotDying4WallStreet, with people saying they didn’t want the to put people in danger just to keep the Dow Jones afloat

But some Trump supporters were happy to proclaim that they would willingly sacrifice themselves not for their fellow man, but for the economy.

While it does seem that we are in an untenable situation, and it’s possible there’s a balance to strike, doing so in a poorly thought out fashion doesn’t seem the way to go.