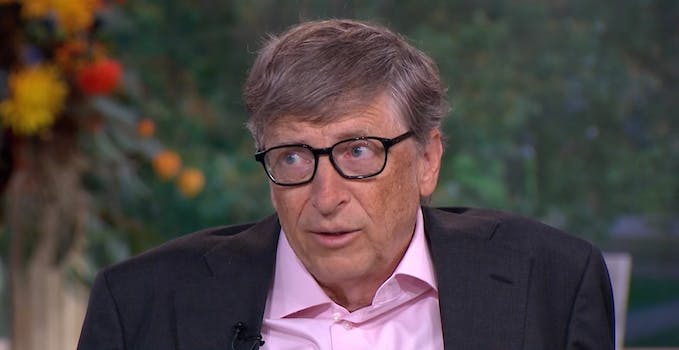 Bill Gates reveals himself as one of Bitcoin’s harshest critics

He thinks it's crazy and speculative.

Microsoft founder Bill Gates is no Bitcoin believer. In fact, he’s so sure the cryptocurrency will fail that he’d be willing to bet against it.

“I would short if there was an easy way to do it,” Gates said Monday in an interview on CNBC.

The world’s second-richest person went on to call ICOs and Bitcoin some of the “crazier, speculative things” and said he was once given the most valuable digital coin for his birthday but sold it a few years later.

“As an asset class, you’re not producing anything and so you shouldn’t expect it to go up. It’s kind of a pure greater fool theory type of investment,” Gates said.

The greater fool theory is the idea that, during a market bubble, an investor can make money by purchasing overvalued assets because there will always be someone else to buy them for a higher price. In this case, the theory suggests the value of Bitcoin isn’t intrinsic but created by an irrational belief that a buyer can pay over value because another “fool” will come along to spend more.

While Gates criticized Bitcoin, he did acknowledge the benefits of blockchain, calling it “really good technology” for sharing databases and verifying transactions.

Bitcoin, a decentralized digital coin not regulated by banks or the government, has blossomed in recent months from being known for attracting criminals to a legitimate alternative form of currency. But very few people use it to make transactions and it remains highly volatile. By the end 2017, Bitcoin had increased in value 15 fold from the start of the year. It fell just short of reaching $20,000 per coin and finished the year at around $14,000. Meanwhile, 2018 hasn’t been as kind to cryptocurrencies. Bitcoin quickly dropped below $7,000 before rising to just short of $10,000 earlier this week.

Gates is on the board of fellow billionaire Warren Buffett’s Berkshire Hathaway conglomerate. Buffet also slammed the cryptocurrency, calling Bitcoin “probably rat poison squared” at the company’s annual shareholder meeting. Their comments may have contributed to Bitcoin’s recent decline.

The U.S. Securities and Exchange Commission (SEC) is also holding meetings to determine whether Etherium, the second largest cryptocurrency, is a security. If it’s ruled to be one, it would mean only SEC-regulated exchanges could trade it. The potential regulation may also be affecting the price of cryptocurrencies.