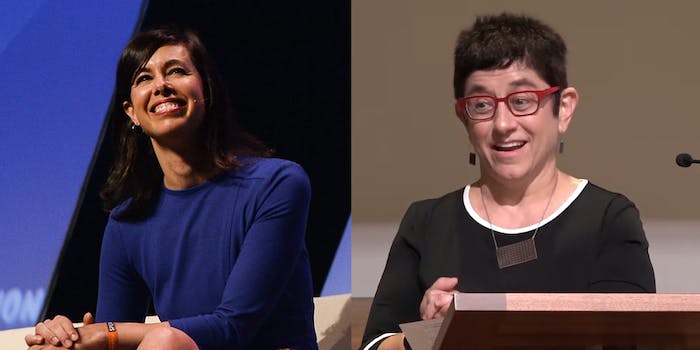 Biden's pick finally ends a months-long delay for the FCC.

The choices from Biden will end a months-long delay in naming people for the posts. The feet dragging recently drew frustration from lawmakers, even as advocacy groups have been urging Biden to fill the roles for months. Rosenworcel was named as the acting chair of the FCC in January. During her time as the acting chair, she has made combating robocalls a focus of the agency while also guiding the FCC through the implementation of the Emergency Broadband Benefit (EBB), a pandemic-related program that gives eligible Americans a monthly discount for their internet bills. She also criticized the FCC’s repeal of net neutrality at the time.

Sohn, a distinguished fellow at the Georgetown Law Institute for Technology Law & Policy, a Benton Senior Fellow & Public Advocate, and former FCC counselor, has also long been rumored to up for either a commissioner or chairwoman spot. Sohn, a staunch net neutrality supporter, also co-founded Public Knowledge, a prominent advocacy group.

Rosenworcel and Sohn will face a confirmation process now that will have to move at lightning speed if Democrats hope to keep a majority at the FCC. Biden’s delay has made it possible that if the confirmation process does not move quickly, Republicans could have a 2-1 majority on the five-person agency.

Rosenworcel’s term technically ended last year, but she is able to continue serving at the FCC until the end of the current term of Congress, which would be January. Confirmations typically take months to complete. However late last year Republicans, then in control of the Senate, went through a fairly speedy process to confirm Nathan Simington, a Republican chosen by former President Donald Trump.

Once they are both confirmed, which seems likely given that Democrats have control of the Senate, the finally full-staffed FCC will have a long list of items progressives are hoping to see accomplished.

It’s long been expected—and even encouraged by the Biden administration—that the FCC under a Democratic majority would reinstate net neutrality rules. Those rules, which prohibited internet service providers (ISPs) from blocking, throttling, or engaging in paid prioritization of internet traffic—also gave the FCC authority over the broadband industry. Those rules were repealed in 2017 by the then Republican-led FCC under former Chairman Ajit Pai.

However, just last week members of the Federal Trade Commission (FTC) and several lawmakers highlighted the need for the FCC to regain its authority over the industry in the wake of an FTC report that highlighted the “staggering” amount of data ISPs collect on their users.

With a full slate of commissioners at the FCC, the Democratic majority will be able to vote on issues that almost assuredly would take a party-line vote. That is expected to include any kind of net neutrality vote involving Title II authority.

Sen. Ed Markey (D-Mass.) has said repeatedly that once the FCC was fully staffed, he would urge the agency to restore net neutrality and simultaneously reintroduce a bill to codify it into law.

Update 10:45am CT: Biden officially announced the nominations on Tuesday morning. The post has been updated to reflect the announcement.