When Facebook spun off its Messenger app and turned it into a standalone application, it seemed as though the intention was to just inconvenience us all. Of course, there was a master plan: Messenger is now its own platform.

This means you’ll be able to install apps that work within Messenger that will let you exchange far more than simple text and emoji. Facebook’s own support of stickers and the recent addition of payments through the chat app are just a few examples of what it will be capable of doing. Now that it’s open to third-party developers, all sorts of new functionality will land in your chat box.

The Messenger platform is launching with 40 apps already on board, and more are sure to follow. But for now, here are the best apps that you should install immediately so you can take your chat game to a whole new level. 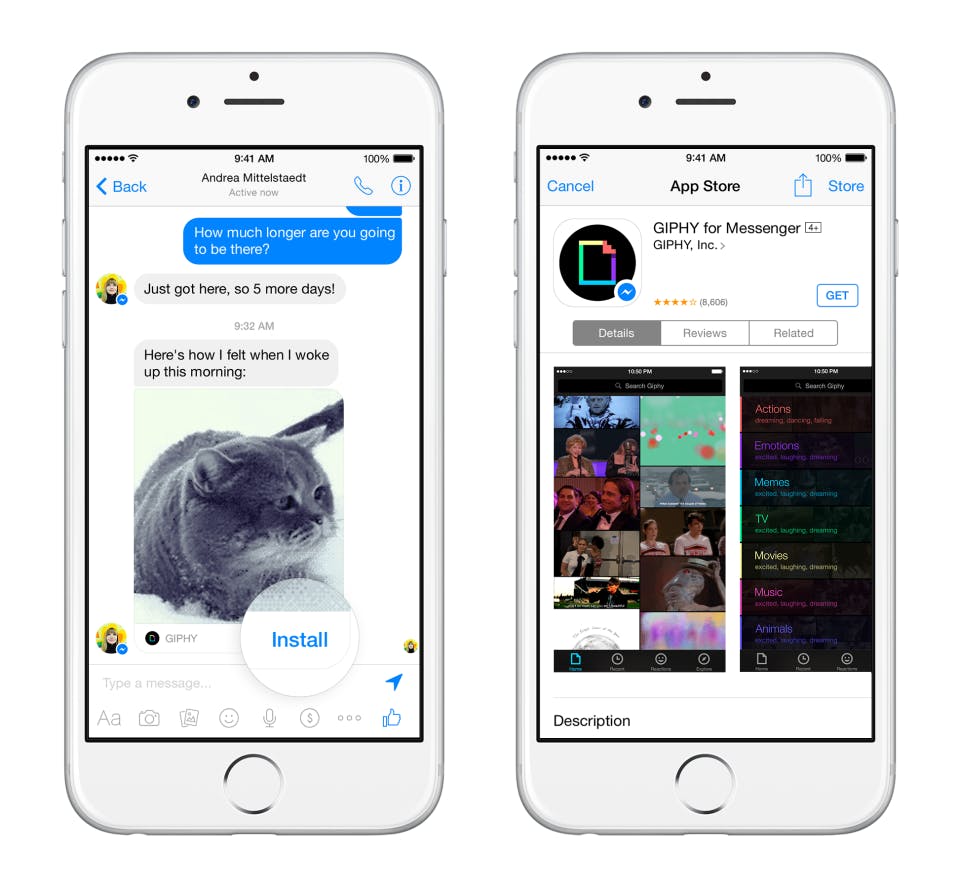 Everybody’s favorite GIF search engine will be making an appearance in Messenger, meaning it’ll be easier than ever to insert the perfect reaction GIF into conversation—and you won’t have to send your friends out of the app and into a browser to actually see it. Giphy will allow users to search for, watch, and share GIFs all from inside the chat. 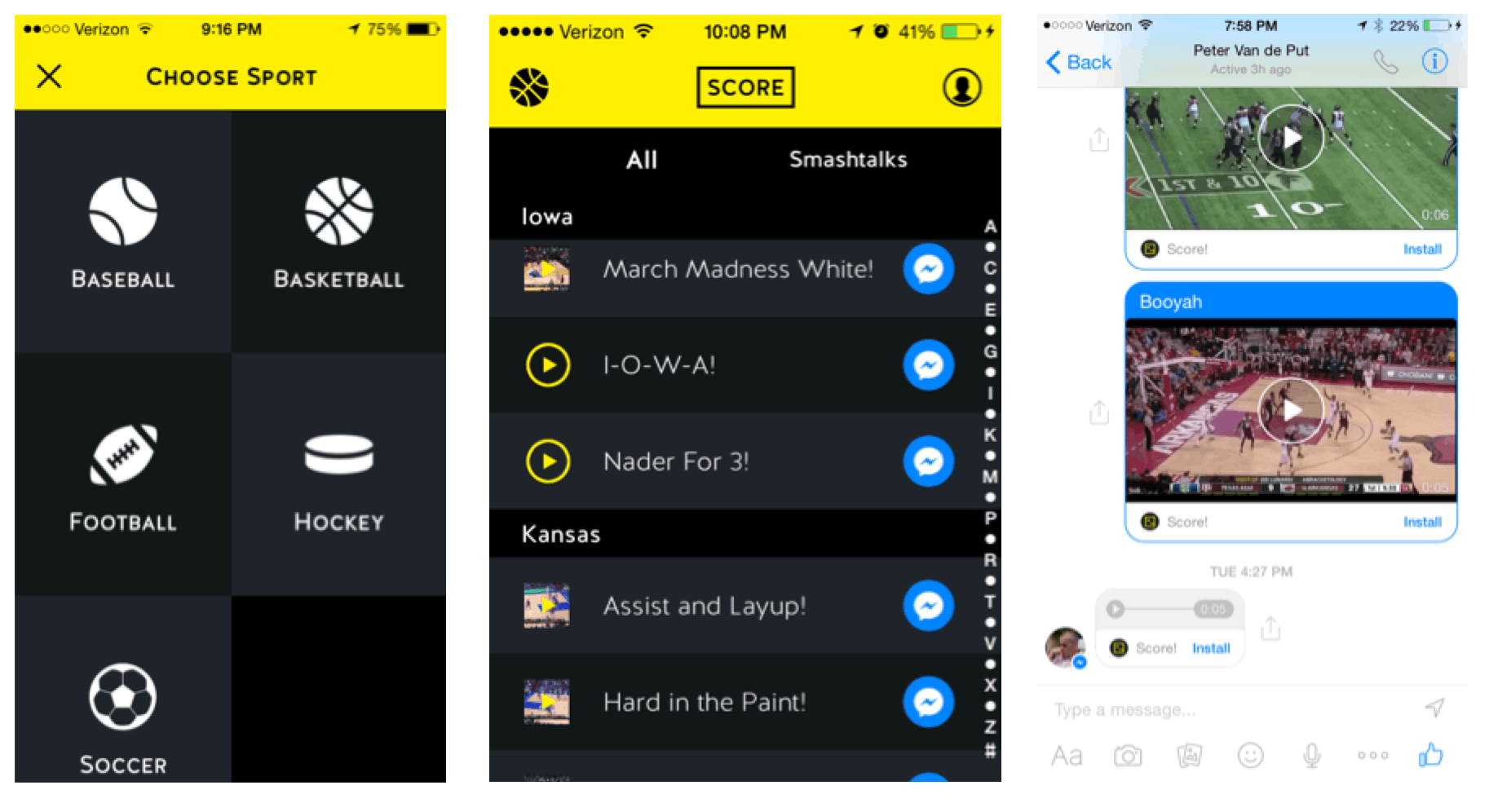 The sports highlight has forever been changed by the GIF. If you remember the days of watching SportsCenter multiple times to catch the top plays, then you’ll welcome Score! on Friends to Messenger with open arms. The app allows users to trash talk friends by inserting highlights, delivered up-to-the-minute, into conversation. Watching the game-winning moment playing on loop in the chat box will make your team’s victory all the sweeter.

JibJab is a relic of an earlier era of that has managed to stick around by adapting its style to new platforms, so it’s no surprise the maker of silly, shareable videos has hopped on board with Facebook. JibJab for Messenger will make it easy to insert personalized animations and stickers that appear with JibJab’s signature cut-out animation style. 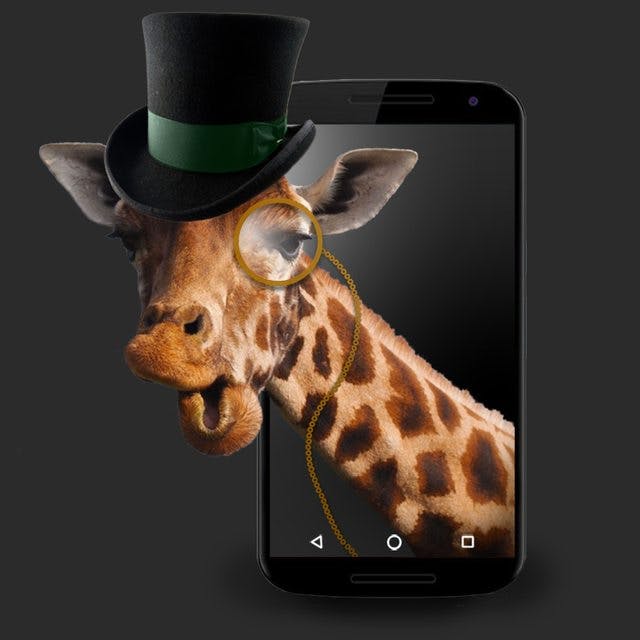 Imgur will bring its massive collection of memes, GIFs, and images to Messenger. The service just recently launched its standalone iOS app, and that app will now integrate with Messenger, making it easy to pick out images to share via chat. 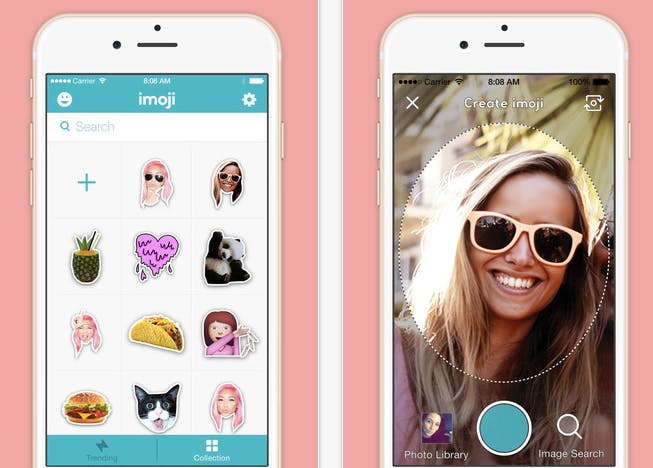 Emojis are a great way to express how you’re feeling, but imoji makes it even more personal by allowing you to turn yourself into an emoji. With imoji’s app for Messenger, users will not only be able to browse popular and trending emojis created by others, but also snap a quick picture and turn their own face into a shareable sticker to put into a message. Ditty makes your messages sing. All you have to do is type up your message like you normally would and then Ditty songifies it for you, setting it to a melody of your choosing. You can send your friends these tiny singing telegrams and they’ll be able to hear your text to the tune of classic jams or modern hits. The work of J.J. Abram’s Bad Robot studio, Action Movie FX has been a hit app for iOS for some time (it won Apple’s App of the Year in 2012). Now it’s updated to make the most of Messenger. Users will be able to create Hollywood-style action sequences, from car crashes to missile attacks, and share the short pieces of mass hysteria through Messenger. 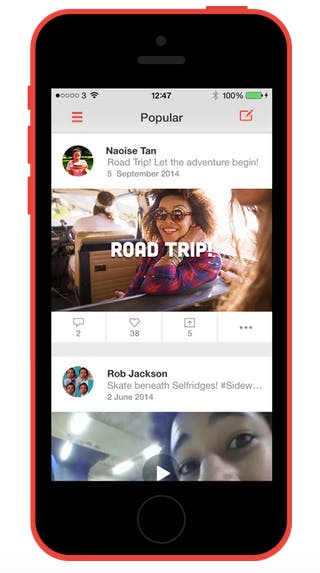 Wordeo lets you turn your simple text into short visual adventures. You can create a quick story through the app by typing up some text and placing it on a background of video clips, pre-recorded or of your own capturing. Add in some music and send it off to your friends. It’s like creating a little visual slideshow of a trip instead of trying to type out every event. There are a lot of places online where you can grab GIFs, but none of them have you. (At least we hope they don’t.) Camoji makes it easy to get the perfect reaction GIF, because you can create it right from your own camera. Record a short video with your phone, apply a filter and make some quick edits, and send it off as a perfectly crafted GIF of your own design. Kanvas is all about turning the white space of the chat box into a covered and colorful canvas. It offers users up the paint brushes of GIFs, 15-second video messages that can be altered in-app, and flipbook messages composed of your own photos. If you’re feeling particularly artistic, you can actually pull up virtual art utensils and draw your replies.