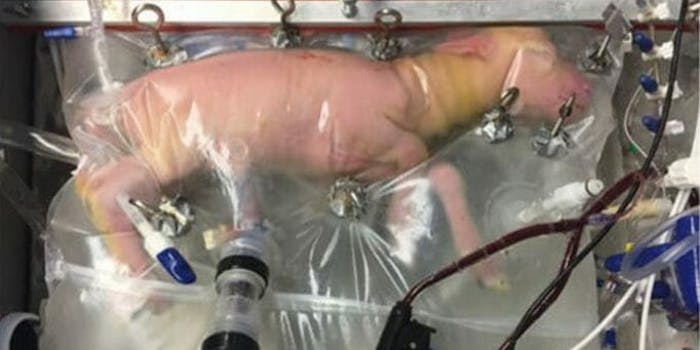 Scientists tested eight fetal lamb for four weeks using the artificial womb. The baby sheep were at the human equivalent of around six months of gestation when they were placed inside the bags. After four weeks, they were put onto a regular ventilator, where researchers observed nearly ideal health conditions. Then all but one, which was able to breathe on its own, were euthanized due to “animal protocol limitations rather than any instability,” allowing the scientists to look at their organs. They discovered that the artificially grown lambs had hearts and lungs that developed correctly without any abnormalities.

Alan Flake, fetal surgeon at the Children’s Hospital of Philadelphia Research Institute, and his colleagues published their research in Nature Communications. They say their findings show that a fetal lamb developing equivalent to an “extreme premature human infant” can be supported in their system for up to four weeks.

“I’m still blown away, whenever I’m down looking at our lambs,” Flake told the Verge. “I think it’s just an amazing thing to sit there and watch the fetus on this support acting like it normally acts in the womb. … It’s a really awe-inspiring endeavor to be able to continue normal gestation outside of the mom.”

The Biobags are made of a translucent polyethylene film, or plastic. They are near sterile and connected to a mobile support platform that incorporates temperature and pressure regulation. For the last 50 years, scientists have attempted to create an artificial womb for growing babies. The Biobag solves the problem of fluid contamination and eliminates pneumonia in the lungs. The baby sheep are covered in an electrolyte solution similar to amniotic fluid in the uterus, and a pumpless circuit allows the fetal heart to power blood flow on its own.

Extreme prematurity is the leading cause of infant morbidity and mortality, attributed to more than one-third of all infant deaths and one-half of cerebral palsy. Extreme prematurity refers to a baby who is born at or before 28 weeks of pregnancy. These babies are often born with a number of potentially life-threatening complications including respiratory distress, lack of swallowing reflexes, and low body temperature. Preterm birth complications led to nearly 1 million deaths worldwide in 2015, according to the World Health Organization.

Flake and his team admit more testing will need to be done before commencing with human trials. They are currently using the bag on human-sized lambs and tracking the progress of those that survived after being taken off the ventilator, “I think it’s realistic to think about three years for first-in-human trials,” Flake said.

These tests may be reminiscent of a particularly frightening scene in The Matrix, but the creation of an artificial womb could save hundreds of thousands of lives every year.