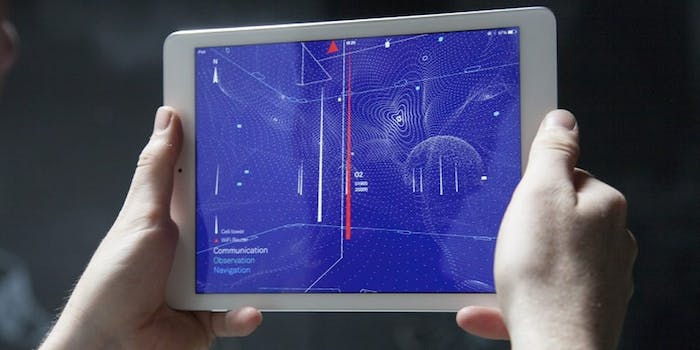 This new radio wave app visualizes the energy all around us

The world just got a lot more astonishing.

We already know that the air is full of radio waves beaming across the universe. But knowing radio waves exist and having visual proof are strikingly different—and now a new app called the Architecture of Radio is making the invisible world around accessible to the naked eye.

Created by Flemish information designer Richard Vijgen, the app aims to “reveal the invisible technological landscape” all around us. Mapping your present location via GPS, the app displays “a 360-degree visualization of signals around you.” And it looks downright incredible:

Engadget points out that the app won’t exactly serve as a functional site navigator, allowing you to follow radio wave locations to and fro. Its visualizations aren’t presented in real time and are more or less a glorified art project. Still, if the rave reviews and mesmerizing footage are anything to go by, it’s more than worth the $3 download price.

The app is currently available for Apple devices, with Android to follow in January.