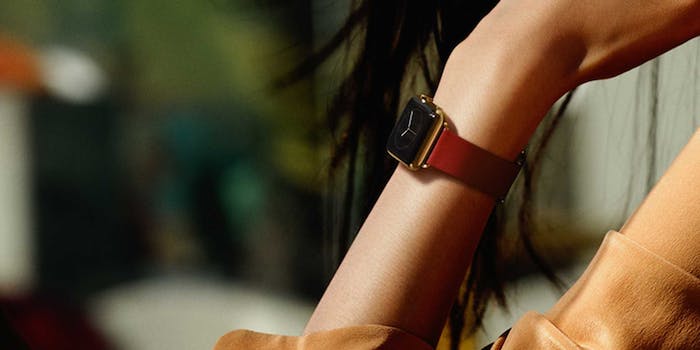 Why the Apple Watch doesn’t have a release date

The wait might be brutal, but it will be worth it.

Today’s Apple event was absolutely jam-packed with information, but one thing that was noticeably missing was a firm release date for the company’s brand new smartwatch. The Apple Watch is slated to arrive in “Early 2015,” which puts its retail debut a minimum of four months away, and that is not sitting well with certain fans.

In January of 2007, Steve Jobs took the stage and showed the world the iPhone for the very first time. You probably remember hearing about it on the day that it happened. What you might not remember is that Apple didn’t actually launch the iPhone until late June which, if you consider that the iPhone 6 is set to hit stores just 10 days after today’s unveiling, is a tremendously long time. That’s exactly what happened today, and it happened for the exact same reason.

Introducing an entirely new class of products is no small feat. Unlike adding a sixth iPhone model to the long history of fantastic predecessors, getting the Apple Watch launch right is harder than simply showing the device off and telling people when to show up to buy it. There are a number of reasons why pushing the device into 2015 makes a lot of sense, so let’s lay it out.

Despite what you saw on stage today—a fully functional device and a whole screen full of amazing apps—the Apple Watch and its software are likely not final. Things we didn’t hear about yesterday, like battery life, are almost certainly still being hammered out, and if more progress needs to be made before we’re told the specifics, there’s no point in jumping the gun.

Getting third parties on board takes time

Apple wants great third-party developers to make apps for its watch, but the company can’t go sending out emails confirming the existence of the device and expect it to remain a secret. By showing the watch off to the world, Apple lets the cat out of the bag, generates excitement, and shows app developers that they can make a pretty penny by getting in on the ground floor. It’s no coincidence that, along with showing the Apple Watch for the first time today, the company also announced its new developer API, WatchKit, which will allow developers to do exactly that.

Apple wants to own the market

The Apple Watch is far and away the most capable smartwatch yet, but it’s not the first. Devices from Motorola, LG, and Samsung have been met with less-than-stellar reviews, but if they’re the only ones available, the market has no choice. Today, would-be smartwatch buyers know what they’ll be missing if they settle for one of the existing models, and Apple just destroyed smartwatch sales for at least the next four months. Without even launching their device, Apple just convinced a whole lot of people to avoid the competition and wait for the device they saw on stage today.

Focus testing, only not really

Apple isn’t dumb. The company knows that some versions of the watch it showed off today aren’t going to sell as well as others. Rather than holding actual focus testing to see which versions strike better than others, they can simply show everything in their hand and let the public guide them. You can bet that Apple is spending plenty of time combing social networks today to get a feel for public feedback, which will help them pull off a flawless launch next year.

There are lots of folks who could easily afford to pick up the new iPhone 6 alongside the Apple Watch if both were to launch on the same day, but there are even more people who wouldn’t be able to. It’s not usually advisable to pile big product releases on top of each other, especially when one of those devices is something many people never had a desire to own before now. Placing the Apple Watch launch in a spot where it won’t be competing with other Apple devices for customer dollars maximizes the chances that the Apple faithful—of which there are millions—will have no problem picking one up on day one.

So no, the long wait between the unveilling of the Apple Watch and its appearance on store shelves isn’t a grand conspiracy. Today’s event generated hype, gave third-party developers a chance to have apps ready for the device’s debut, and seriously hampered sales of the competition, all at the same time. It’s a strategic and well-thought out decision that gives Apple that best odds we’ll think it was worth the wait when it’s finally here.