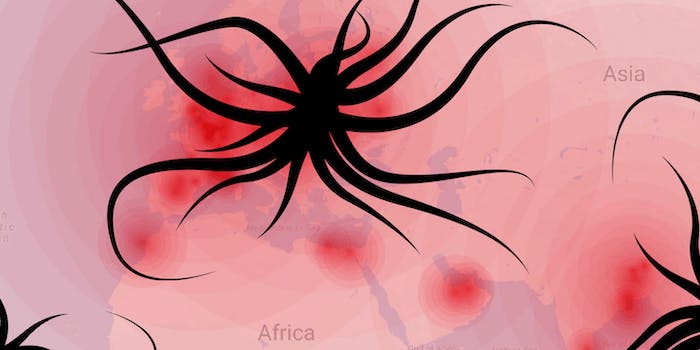 Plague wants to infect you.

A new app for iOS and Android is taking “viral content” very literally.

Instead of sharing information via likes and retweets, Plague spreads posts to people nearby. Plague users are all connected—all potential vessels for the virus. When a user submits a post, it’s sent into the wild. The post is shared with the four Plague users nearest the source. Those awaiting carriers can choose to accept the virus—swiping up and spreading the outbreak onward to the people nearest them—or rejecting it by swiping down and leaving it at a dead end.

Plague creates a clever way to map out how content is spread. It also democratizes the process of sharing content: There are no followers, there are no power users or gatekeepers dominating the feed. The app doesn’t even show who spread the content—it only shares the point of origin so you can see who’s responsible for the latest epidemic of cat GIFs.

Of course, the ingenuity of the app goes to waste if what’s being shared isn’t interesting. In my attempts to become infected on Plague, I ran into the types of photos that I’d scroll past on Facebook. There were the occasional occurrences of original content, but it was mostly repurposed memes and pictures from sites like 9gag. I spent most of my time on Plague with my virtual surgical mask on.

To make Plague a truly interesting platform for sharing, it needs a new kind of content, something that would infect the hearts and minds of all those who saw it. Plague requires content that is so undeniable that people couldn’t help but want to spread it far and wide. It’s not quite there yet.