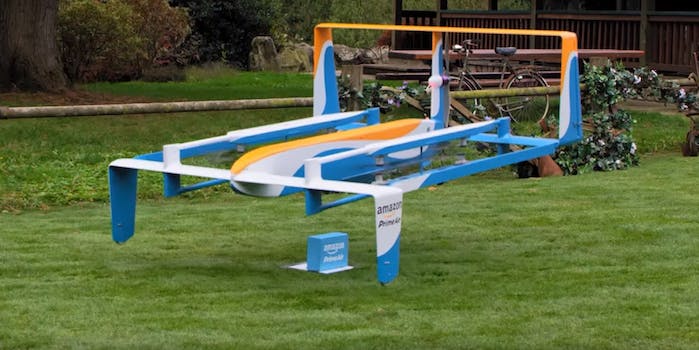 Amazon’s new delivery drone is half airplane, half copter, and all awesome

Someday, your lightweight package could arrive at your doorstep in 30 minutes or less.

Nearly two years ago, Amazon founder and CEO Jeff Bezos revealed that his company wanted to create a network of delivery drones. While that network is still largely in the testing stages, we’re one step closer to seeing what Bezos’s vision looks like in a new Amazon commercial.

The shopping giant got former Top Gear host Jeremy Clarkson—who is quickly becoming one of the company’s faces since he and his co-hosts signed a three-year deal back in July—to demonstrate the benefits of Amazon Prime Air. With the backdrop of a family needing to replace a soccer cleat on short notice, Clarkson breaks down the process of how the drone—a sleeker model than the one first shown in 2013—travels from the factory straight to your doorstep in less than 30 minutes (for packages that weigh up to five pounds).

Amazon has also published a FAQ page for customers curious about the process, where it explains that’s it’s currently testing more than a dozen prototypes designed for different conditions and environments. But deploying the drones for real may take much longer: Amazon won’t launch Prime Air until “we are able to demonstrate safe operations.”