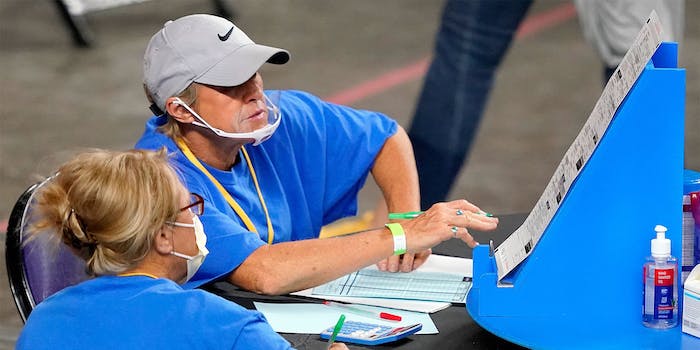 Auditors are waving black lights around, looking for bamboo fibers, kinematic artifacts, and seeing evidence of fraud in cheese dust.

Maricopa County, Arizona is the scene of a conspiracy theory-filled, quixotic quest to prove that the 2020 election results were fraudulent. Those observing the audit currently underway, which is seeking proof of election fraud, are finding it equally disturbing and laughable.

The lead company tasked with proving the false claim of a tainted election in Maricopa County is Cyber Ninjas, a Florida-based outfit helmed by a man who has spread election conspiracy theories.

From the beginning, many were concerned that Cyber Ninjas’ audit would be tainted by the fact that CEO Doug Logan is a “Stop the Steal” conspiracy theorist who authored a document the Kraken herself, Sidney Powell, posted on her website as proof the election was stolen from former President Donald Trump. Logan attempted to alleviate such concerns by claiming he wouldn’t personally touch the ballots. Skeptics were little comforted.

Those suspicious of the audit’s intent and validity further point to the fact that private individuals, many with well-known allegiances to Trump, are paying the lion’s share of the costs. State Senate Republicans authorized a contract which allows the companies conducting the audit, led by Cyber Ninjas, to receive funds from private entities—reportedly with no limit or restrictions on how the funds are spent, or accounting requirement, a CNN analysis found. A CBS affiliate reports that benefactors and fundraisers include L. Lin Wood, Mike Lindell, One America News personality Christina Bobb, and Overstock founder Patrick Byrne—a list that doesn’t exactly assuage concerns.

The audit itself is worse than anyone feared. Many believe it is contributing to additional election conspiracies.

The longer it drags on, the more outlandish and laughable—and deeply distressing to anyone who cares about election integrity—the situation becomes. Reports have emerged of Cyber Ninjas’ volunteers suspiciously regarding “Cheeto finger” on a ballot as potential evidence of fraud, waving black lights around, and searching for bamboo fibers and something called kinematic artifacts to prove the same.

They’re hunting for bamboo because, apparently, they think its presence will prove there were fake ballots shipped from South Korea, one of many baseless election conspiracies. Why they’re hunting for kinematic artifacts is anyone’s guess, as is why they’re using black lights, which are commonly used to detect bodily fluids at crime scenes, but not to ferret out evidence of voter fraud. Cheese dust is suspicious because, well, isn’t it always?

A national expert on post-election audits told the Washington Post that auditors seeking evidence to overturn the results in Maricopa County have taken to flagging ballots as suspicious for reasons as meaningless as how evenly they were filled out (thinking it could’ve been done by a machine) and whether they were folded, theorizing (without evidence) that in-person voters never fold their ballots.

Not all of the details are this ridiculous. At one point Cyber Ninjas accused Maricopa County of deleting a database, which would be a crime. Cyber Ninjas later admitted that they had the database all along.

Their auditors have also been accused of failing to properly secure ballots or instilling a consistent procedure for ensuring their results are valid. Their apparent ignorance of election auditing procedures and insistence on secrecy has instilled even less confidence in the audit, while causing significant alarm.

Cyber Ninjas’ efforts are generating widespread ridicule and questions as to why the state legislature would spend $150,000 of taxpayer funds and place its trust with an entity even lawmakers in the company’s home state have never heard of. It’s a company whose website doesn’t mention election auditing, and whose mailing address, according to state filings, appears to be a UPS store.

Many, including some Arizona Republicans, are now convinced Cyber Ninjas doesn’t have the faintest notion of how to properly audit an election. Its sole qualifications to do so appears to be Logan propagating election fraud lies, many about Dominion Voting Systems, and being listed as an expert witness in an equally baseless effort to overturn election results in Michigan.

The audit is fracturing the Arizona Republican Party. After state Senate President Karen Fann, a Republican, sent a letter parroting Cyber Ninjas’ allegations of ballot mishandling and other complaints, the Maricopa County Board of Supervisors decided that they’d had enough.

They replied to Fann’s allegations in a scathing, 14-page letter. In it, the seven, mostly Republicans, demanded that Fann retract her false and defamatory claims about election fraud. They also made pointed criticisms of both her and Cyber Ninjas:

You have rented out the once good name of the Arizona State Senate to grifters and con-artists, who are fundraising hard-earned money from our fellow citizens even as your contractors parade around the Coliseum, hunting for bamboo and something they call ‘kinematic artifacts’ while shining purple lights for effect. None of these things are done in a serious audit. The result is that the Arizona Senate is held up to ridicule in every corner of the globe and our democracy is imperiled.

The board went on to meticulously address and discredit each of Fann’s questions. They further declined her invitation to discuss the same at a meeting, as they said they’d wasted enough county resources already and pleaded with her to stop the audit.

“We implore you to recognize the obvious truth: your ‘auditors’ are in way over their heads.”

The audit was supposed to be completed by May 14. That’s since been postponed and the audit is currently on pause because the space it was using has been rented out for high school graduation ceremonies. Cyber Ninjas claims it will complete its work by the end of June.

The quantity of Cheeto dust, bamboo fibers, and kinematic artifacts as yet identified is unknown.