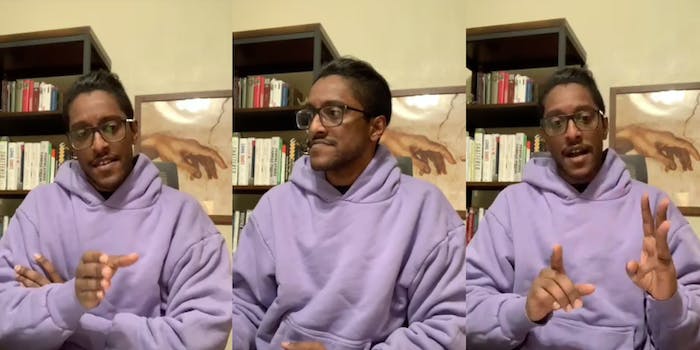 Ali Alexander flirts with QAnon on Telegram in rant about ’17’

On Telegram, Alexander made a lengthy post about the number 17. The number 17 correlates to the 17th letter of the alphabet, which is Q. The number is popular in Q circles, the conspiracy theory that a group of pedophile elites is running America, and that former President Donald Trump was sent to fight them.

“17 states affected right now. A favorite number of the globalists. America is demonically possessed,” he wrote.

But it didn’t stop there for Alexander; on Tuesday morning, the right-wing activist elaborated with words that align with QAnon beliefs.

“17 states are in weather crisis right now. We are experiencing rolling blackouts and outages this country hasn’t seen before,” he wrote. “Mitch McConnell and several others ‘on our side” are in on it and not running for re-election. They are there to protect ‘The Plan’. The Technocracy is putting on its flesh as it reveals itself to the public. They plan in centuries. And you’ve been had by the Order that loves 17.”

The at-times cryptic rant on the fringe messaging app both dabbles in Q theory, pushing the idea that President Joe Biden will step down, but all claims people were “had by the Order that loves 17.” So it’s unclear where he stands. But it also isn’t his only outlandish statement made in recent days. Alexander on Monday continued to fuel the idea of an American civil war.

“There are 3 outcomes before us. And I say this as one of the leading political theorists in the world. 1. Civil War 2. Civil War 3. Concession,” he stated.

The now infamous activist, who has called for violence, didn’t return the Daily Dot’s request for comment on his QAnon messages.

Alexander, who has been removed from most mainstream platforms following his organizing of the Jan. 6 rally and heated rhetoric, has since resorted to threatening legal action against those who call him a criminal.

On Friday evening, when the Daily Dot attempted to ask Alexander about his plans to create a MAGA “mega-city,” he blocked this reporter from his Telegram.