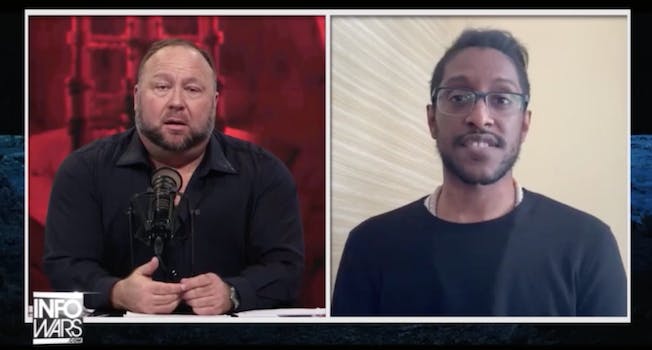 The right-wing activist goes on the defensive.

Right-wing activist Ali Alexander, formerly Ali Akbar, one of the “Stop the Steal” movement leaders who urged former President Donald Trump’s supporters to march in Washington, D.C. on Jan. 6, now claims he will take legal action against anyone who says he should be held accountable for the violent insurrection.

On the eve of the Jan. 6 march, Alexander appeared at a smaller rally where he shouted “victory or death.” He also threatened that “something bad” would happen to a D.C. hotel that wanted nothing to do with pro-Trump marchers.

Nearly a month after the incident, Alexander is now going on the defensive following New York Times best-selling author Don Winslow continually calling him out on Twitter.

On Sunday, Alexander joined right-wing conspiracy theorist Alex Jones on InfoWars to deflect blame, say the riots were “peaceful,” and claim he will be filing lawsuits.

“We were on the eve of history,” Alexander stated. “We still made history because Jan. 6 was peaceful, 99.9% of a million people being totally peaceful when we feel our election was stolen.”

The right-wing activist further theorized that Trump advisor Katrina Pierson was responsible for the riots due to her not allowing Jones and Alexander to speak before the MAGA mob marched to the Capitol building.

Alexander concluded his segment with Jones by floating the idea of suing those who have called him a criminal. (He is, in fact, a felon.)

“I am going to be suing a lot of people, anyone who claims that we planned the siege and that we are criminals,” the right-wing provocateur stated. “You can’t get away with alleging that we committed a crime.”

Since his proclamation however, Alexander has kept a low profile, not appearing in any public events supporting the far-right movement he helped stoked.