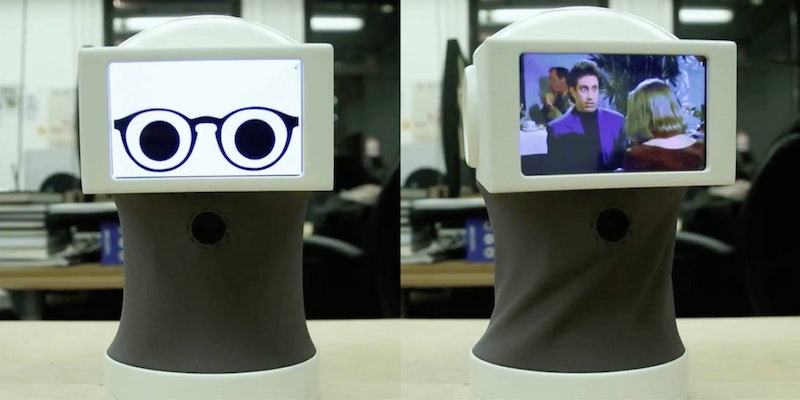 Student creates a cute robot assistant that responds in GIFs

So, for his graduate thesis project at the New York University Tisch School of the Arts, Singh decided to combine all three. Meet Peeqo (pronounced “pea-koh”), Singh’s adorable robot assistant who listens to voice commands and expresses himself in GIFs.

On Singh’s personal website he writes that Peeqo is a desktop assistant designed for people who spend long hours at their desks.

In addition to moving in that cute Pixar-esque manner and responding with GIFs pulled from GIPHY and stored locally, Peeqo connects with other smart devices and responds to voice commands, like playing music and “preventing” the user from going to procrastination-inducing sites with menacing reactions.

Keeping me in Check

Eventually Peeqo will be able to recognize faces and emotions, evidenced by the camera in his… chest? But until then, the li’l guy is still learning.

Though Singh originally presented Peeqo for his thesis in the spring, he shared his robot pal and the creation process with Reddit and Imgur on Wednesday. In his Imgur post, Singh laid out a detailed map of Peeqo’s development, from sketching out initial designs, to prototyping, 3D printing, hardwiring, and programming.

One of the coolest parts of Peeqo’s creation is that Singh has made his work completely open source. So yes, you too can have your own freakin’ adorable procrastination-blocking buddy that speaks web culture.

Within his Imgur post, Singh has included most of Peeqo’s specs and hardware (and where to buy them), as well as the coding, and explanations of how he found other resources. That being said, Peeqo’s website says the robot will be fully open source soon, so interested parties can sign up for email updates.

Singh wrote his post that he’ll have a Peeqo demonstration video up soon as well. Until then, you can watch his thesis presentation below. Seriously, just do it. Marvel at how cute that teeny little bot is.

If only Singh had plans to patent and sell Peeqo’s design. Honestly, just take my money. Take all of it!