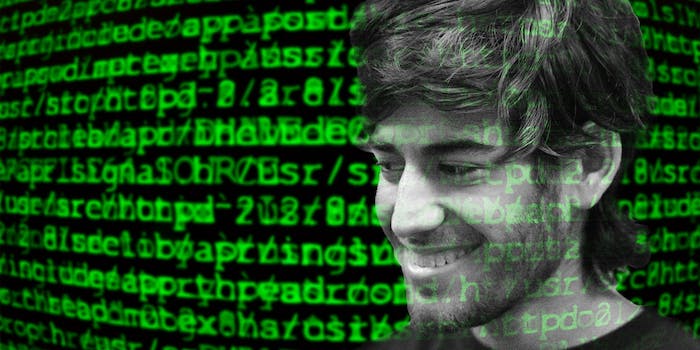 They came, they hacked, they remembered their fallen friend.

“I was inspired by the things he did and the ideas that he had,” Yan Zhu, a hackathon organizer and security engineer, told the crowd of roughly 50 hackers, lawyers, and archivists who had gathered in San Francisco for a hackathon to honor Aaron Swartz on what would have been his 28th birthday.

The event was part of Aaron Swartz Day, a weekend celebration of Swartz’s legacy held in venues around the world. Swartz was a prolific programmer who championed open access to information and worked on projects like Reddit, SecureDrop, and RECAP, a plugin that makes court documents available outside the paywall imposed by the Public Access to Court Electronic Records, better known as PACER.

“How are we going to keep on doing the work he did?” Zhu asked. “How will we keep his ideas alive?”

The answer, for those assembled at the Internet Archive in San Francisco—and in Buenos Aires, Oxford, Kathmandu, and at least six other locations worldwide —is to hack.

In addition to his programming contributions, Swartz is widely known for being the subject of a criminal prosecution under the Computer Fraud and Abuse Act (CFAA) after he used a simple Python script to download documents from the academic database JSTOR. Prosecutors painted him as the bad kind of hacker—the Hollywood sort who breaks into computer networks with a flurry of keystrokes to steal top-secret information.

“It’s just nonsense. Of course Aaron was a hacker in the broad sense of the term, but in terms of the criminal term, he was no hacker and he didn’t do anything like that,” said Dan Purcell, a partner at the law firm of Keker & Van Nest LLP in San Francisco. Purcell would have represented Swartz had his case gone to trial. Instead, Swartz committed suicide in Jan. 2013, before the trial commenced.

“What Aaron did, whether you call it a prank or a consciousness-raising exercise, it was not a crime.”

This distinction is an important one for organizers of the memorial hackathon, like Lisa Rein, cofounder of Creative Commons, who selected “setting the record straight” as the theme for this year’s event. Like Purcell, she emphasized that Swartz’s actions were far from criminal.

But as much as Aaron Swartz Day is about dispersing misconceptions about what it means to be a hacker, it’s also about simply hacking.

Participants in San Francisco hunched over small tables in the lobby of the Internet Archive’s grand, white-columned building–Internet Archive founder and digital librarian Brewster Kahle jokes that he bought the structure, which formerly housed a Christian Science church, because it resembled the organization’s logo of a library edifice. This year’s hackathon focused on improving code for a variety of privacy projects.

Zhu and others were at work on SecureDrop, which allows newsrooms to securely receive documents from sources who wish to remain anonymous. Swartz originally coded SecureDrop; it is now managed by the Freedom of the Press Foundation and used by news outlets like the Guardian, the New Yorker, and Forbes.

The Internet Archive is a fitting venue for a Swartz memorial because of his personal connection to the organization. Swartz worked with the Internet Archive to create public book collections, OpenLibrary.org, and RECAP, a plugin that makes legal documents from PACER available to the public free of charge (PACER charges 10 cents per page for access to records). The Archive also maintains a special collection dedicated to Swartz that stores emails, photos, audio, and video of the late activist and programmer.

As the hackathon segued into an evening reception, tables of sandwiches and coffee were replaced with cheese platters and wine. Garrett Robinson, the lead developer of SecureDrop, excitedly told the Daily Dot that his email had been overflowing with pull requests—changes submitted to SecureDrop’s code. In a reportback for the attendees, Robinson said that, after last year’s memorial hackathon, the number of contributors to SecureDrop’s code jumped from 20 to 49. The release of a new version of SecureDrop 0.3, is imminent.

Kevin Poulson, a contributing editor at Wired, who worked with Swartz on an early version of SecureDrop, also spoke to hackathon attendees. Poulson is at work on his own paper version of a Swartz hack. He sued for access to files on Swartz compiled by the U.S. Secret Service; the government is now in the process of releasing thousands of pages to Poulson.

Poulson told the crowd he had recently encountered some of the first redactions to the documents, in emails between Assistant U.S. Attorney Steve Heymann and JSTOR employees—but, using emails previously released by JSTOR, he was able to reveal the redacted text. The documents can be found online at SwartzFiles.com.

Although Swartz’s coding accomplishments can be emulated in the hackathon atmosphere, his political hacks are proving more difficult. Swartz helped successfully stall the passage of the Stop Online Piracy Act (SOPA), through viral grassroots organization. However, since his death, efforts to reform the CFAA have not been so successful.

Aaron’s Law, drafted by Representative Zoe Lofgren (D-Calif.) and Senator Ron Wyden (D-Ore.), aimed to rein in prosecutions under the CFAA, but the bill has stalled in Congress. “We didn’t get the support of Silicon Valley companies,” said Cindy Cohn, legal director of the EFF, of the reform effort. “It looked like Silicon Valley was split [on this issue] and that really killed our chances.”

Despite these political hurdles, Swartz’s memory remains in good hands. As participants settled in to the Internet Archive’s Great Room to watch The Internet’s Own Boy, a documentary, directed by Brian Knappenberger, about Swartz’s life, Zhu reflected on the day’s events.

“It was really awesome to walk in today and see people, even at 11am on a Saturday, ready to work on projects, and being inspired by him,” said Zhu.

Photos via ragesoss/Flickr (CC BY SA 2.0) and lzamgs.com | Remix by Fernando Alfonso III