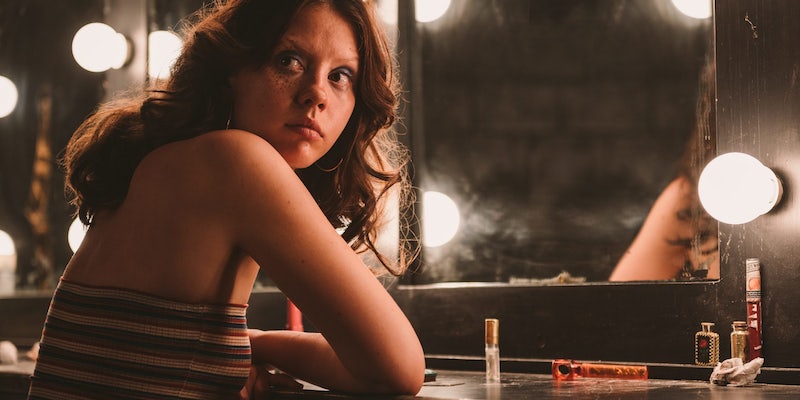 Mia Goth’s Maxine is “a fucking sex symbol,” as she declares to herself, or at least she will be, after she and a rag-tag group of amateur porn stars and filmmakers make a “good dirty movie.” The crew, led by Maxine’s middle-aged boyfriend and producer Wayne (Martin Henderson), is on route to a remote Texas farm where they’ll shoot the film, starring Brittany Snow’s shameless mother-figure Bobby-Lynne and Scott Mescudi’s (also known as rapper Kid Cudi) smooth Jackson alongside Maxine. RJ (Owen Campbell) joins as the young, self-serious “director” and brings along his girlfriend Lorraine (Jenna Ortega), who’s simply there to hold the mic. However, when the elderly owners of the property discover exactly what kind of film they’re making, the crew finds themselves fighting for their lives.

The film wears its classic horror inspirations (most obviously “The Texas Chain Saw Massacre”) on its sleeve, but avoids being a simple recreation through its apt commentary. Set in 1979, the golden age of both horror and porn, the film nestles itself at the intersection of these side-lined genres and criticizes the self-righteous morality that brushed them off as cheap, outrageous projects poisoning the minds of the youth. Even more, the film doesn’t cheat the characterization of its killers. Their superior morality comes from a place of repression and envy of the young, hot dreamers, a thoroughly explored motive that increases its fear factor.

Goth’s performance as the enigmatic, confident Maxine begets her “X factor,” as Wayne puts it, while Ortega’s Lorraine serves as her sheepish, uncertain foil—that is, before Lorraine becomes enamored with the sex scenes they’re producing. Both Snow and Mescudi tap into the humor of their characters without tarnishing their depth as people making their own American dream. Jackson finds his talent after returning from Vietnam, and experienced star Bobby-Lynne embraces the value her body holds. Each character believes their low-budget film is their ticket to stardom, and given the 1980s boom of VHS pornography, it very well could have been.

West’s script is also darkly funny—even in its most gory moments. However, there are scenes where the film’s balance between humor and horror falls out of place. When Snow’s Bobby-Lynne breaks into an impromptu cover of Fleetwood Mac’s “Landslide,” it’s first unclear whether the moment is intended to spark a laugh. Only when the screen splits to reveal the old woman, Pearl, does the deeply sad metaphor of the track hit. In other, more uncomfortable scenes, bold laughs jumped out from the audience at the film’s South by Southwest (SXSW) premiere on March 13, creating uncertainty in tone. Optimistically, these moments could serve as commentary on the differing, but natural human reactions to abject behavior, but the tonal shifts don’t always land.