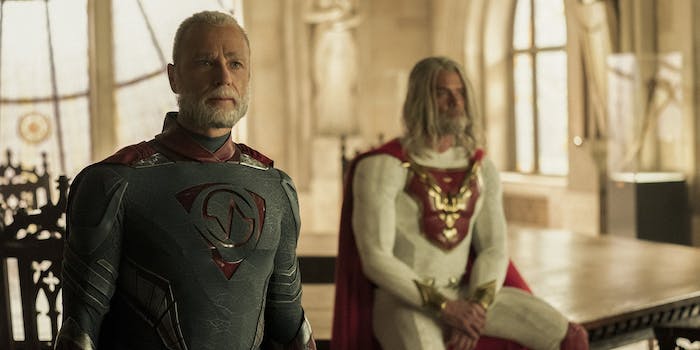 Netflix: ‘Jupiter’s Legacy’ is a forgettable riff on the superhero genre

It clearly wants to be 'Watchmen' but fails at every turn.

Are superhero shows the new crime procedurals, an oversaturated genre where most examples feel blandly generic? If so, that may explain Jupiter’s Legacy. Too bad it doesn’t have the simple entertainment value of the CSIs of the world. Adapted by Daredevil showrunner Steven DeKnight (who left the show halfway through the season) from a comic by Mark Millar and Frank Quitely, this eight-episode drama is a weak and poorly-written Watchmen wannabe, attempting to deconstruct the superhero genre while having nothing interesting to say.

RELEASE DATE: May 7, 2021
CREATOR: Steven DeKnight
STREAMING: Netflix
Adapted from a comic by Mark Millar and Frank Quitely, this adult superhero drama wants to be ‘Watchmen,’ but fails on almost every level. Slow-moving and weakly written, it follows two generations of a famous superhero family.

Josh Duhamel and Leslie Bibb star as Sheldon and Grace Sampson, a superhero couple who gained their powers (and enhanced longevity) during the Great Depression. In the present day, they’re the celebrated leaders of a superhero team, with Duhamel wearing a truly heinous glue-on beard. (He’s “old,” you see!) The Sampsons are also parents to two adult children: Chloe (Elena Kampouris) and Brandon (Andrew Horton). Both kids have superpowers as well and are predictably messed up by their parents’ legacy. Brandon is desperate to live up to his father’s high expectations as a superhero, while Chloe is the rebel child—a model/socialite with substance abuse issues.

There’s nothing wrong with using tried-and-tested tropes like these, reflecting how real people react to having famous parents. But Jupiter’s Legacy explores Brandon and Chloe’s stories in a drearily unimaginative manner. Chloe feels like a low-budget Jessica Jones ripoff, relying on a surface-level depiction of celebrity life and drug/alcohol abuse. Meanwhile, Brandon follows a paint-by-numbers storyline for young male heroes with daddy issues. As is often the case, their mom plays second-fiddle to her husband, with less obvious influence on her children. And this all plays out through embarrassingly clunky dialogue, with characters constantly stating the obvious and failing to talk like actual human beings.

Focusing on family conflicts, Jupiter’s Legacy unfolds in two timelines: flashbacks to the 1929 Wall Street crash, and a present-day setting where superheroes are a widespread phenomenon. Back in 1929, Sheldon Sampson and his brother Walter (played by the sadly underutilized English character actor Ben Daniels) are the sons of a wealthy steel magnate. Their arc acts as a collective origin story for the first generation of superheroes.

Jupiter’s Legacy is the first adaptation from Netflix’s 2017 “Millarworld” deal, giving Netflix full access to all of Mark Millar’s original comics aside from the better-known Kick-Ass and Kingsman. There’s a definite aura of post-Watchmen storytelling here, examining the superhero genre and its relationship with 20th-century American history. But unlike Watchmen (either the original or the HBO spinoff), Jupiter’s Legacy lacks any sense of political insight. The most prominent members of the first-gen superhero team are three rich white men, the Sampson brothers, and Sheldon’s best friend George Hutchence (Matt Lanter). But does the show explore how they’re shaped by this rarified background? Not in the five episodes I watched for this review. Instead, we focus heavily on Sheldon’s boring personal struggles, without saying anything meaningful about wealth and class in America.

Over in the present day, Chloe and Brandon offer a different kind of poor-little-rich-kid archetype. Both of them clash with their father’s strict moral code, which includes a rule against killing supervillains. This classic theme ties into real-world debates about justice, police brutality and incarceration, offering plenty of material for allegorical storytelling. But Jupiter’s Legacy simplifies it into a very basic father/son conflict, with little discussion of the power imbalance between superheroes and civilians.

I struggle to see what we’re meant to get from this show. The script is full of po-faced dialogue like Sheldon literally saying, “The country’s never been more divided.” Characters keep suggesting that the 21st-century is uniquely violent and conflicted, without digging into what those conflicts may be. As an adult drama, it’s hopelessly shallow. But most importantly, it’s not fun. While Netflix’s Marvel shows were serious and gritty, they (mostly) featured compelling characters, well-choreographed fight scenes, and a sense of humor. The same goes for the thoroughly entertaining Umbrella Academy. Meanwhile, Jupiter’s Legacy has as much personal flair as its own Wikipedia page. A few weeks from now, I imagine I’ll only remember it for one thing: Josh Duhamel’s absurdly fake-looking beard and wig.