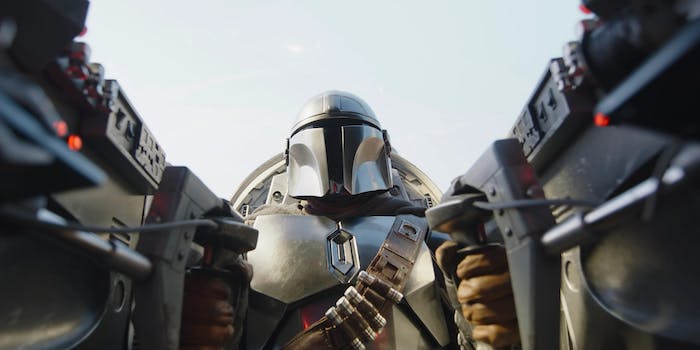 This episode is the worst kind of fanservice.

This recap includes spoilers for The Book of Boba Fett chapter 6, “From the Desert Comes a Stranger.”

Who signed off on giving CGI Luke Skywalker this much screentime? Previously appearing in The Mandalorian, this 30-something version of Luke is an eery product of digital effects: Mark Hamill‘s digitally de-aged face superimposed onto a body double, speaking in a synthetic voice replicated from vintage Hamill audio. The result is an unnerving facsimile of a beloved hero. Adding insult to injury, Luke’s characterization here is downright horrible.

For the second week in a row, The Book of Boba Fett gives us a largely Boba-free episode. After a brief scene with Tatooine marshall Cobb Vanth (Timothy Olyphant), we travel with Din Djarin to visit Grogu, who is now at Luke’s new Jedi school. In the middle of a bamboo forest, Din is greeted by R2-D2 and Anakin’s former padawan Ahsoka Tano (Rosario Dawson), who prevent him from seeing Grogu in person.

Traditional Jedi training requires children to be separated from their families, something the movies depict in an ambivalent light. Sure, the old Jedi Order produced plenty of great heroes. But its restrictive mindset also led to Anakin’s downfall. In later generations, we see Luke and Rey flourish while embracing their emotions, debunking the idea that Jedi must forego all attachments. This makes the Luke/Grogu subplot doubly baffling, because Luke is suddenly portrayed as a harsh taskmaster. To a toddler.

Who is Luke Skywalker, anyway?

The Last Jedi hinted that Luke was a flawed mentor at this point in his life, struggling with the pressure of rebuilding the Jedi Order alone. However, this Boba Fett episode portrays him in a uniquely negative light, to the point where he’s almost unrecognizable.

In the original Star Wars trilogy, Luke evolved from a whiny teenager into a seasoned warrior, tempered by a wry sense of humor, a passion for adventure, and a freely-expressed love for his friends. He’s powerful yet goofy and likable—qualities that a CGI mannequin can’t express. Above all though, Boba Fett‘s version of Luke is just… thoughtlessly unpleasant.

During an extended training montage, Luke puts Grogu through his paces: meditation, athletic exercises, and being attacked by a flying droid. It’s the kind of stuff Luke did when he was 20, but Grogu is literally a baby. Due to his unusually long lifespan, Grogu belongs in pre-school for the next 50 years. In that context, Luke’s methods feel inappropriate and cruel.

At one point, he even forces Grogu to have a flashback to the destruction of the Jedi Temple, when all of Grogu’s caregivers were murdered. You’d expect Luke to apologize for bringing up such a painful memory, but instead, the show treats it like a normal flashback scene, with Luke advising his student that “the galaxy is a dangerous place.” Later on, Ahsoka praises Luke’s teaching process, which makes her look bad as well. Unlike the vibrant hero of the Clone Wars series, she’s now an inscrutable figure who nods wisely in the background. Huh?

The show doesn’t fully endorse Luke’s attitude. After all, we’re predisposed to sympathize with Din Djarin, who wants to reunite with Grogu. However, it’s hard to believe that writer Jon Favreau meant Luke to come across this badly. The most charitable explanation is that Luke is already sowing the seeds of his own failure by recreating the flaws of the old Jedi Order. That’s a common interpretation of his life during this period in canon. But while that makes sense on a macro level, it doesn’t explain his personal behavior.

This version of Luke Skywalker is dull, strict, and unlikeable; a totally different personality to his depiction in the movies. His main traits here are being humorless and mean to a toddler! An especially wild move considering the fact that Ben Solo is about four years old at this point. So while we can excuse a certain amount of misguided teaching philosophies, Luke has at least met a toddler before.

The worst kind of fanservice

Like last week’s episode, this interlude is largely irrelevant to Boba Fett. The Luke/Grogu scenes are bookended by a desultory nod to Boba’s gang war on Tatooine, with Din recruiting Cobb Vanth to join Boba’s squad. Then a Pyke Syndicate assassin shoots Cobb in the chest—something that only matters in the sense that Timothy Olyphant was a fun addition to the cast.

At this point, it’s hard to deny the pointlessness of this show. After four weeks of failing to give Boba Fett a coherent personality or arc, we segued into a standalone chapter of The Mandalorian, followed by an extended fanservice cameo for Luke Skywalker. And while “fanservice” is an accurate term here, it’s hard to see how fans are actually being served.

Luke’s guest role isn’t fun or narratively important. It doesn’t even reveal any nerdy new details of Star Wars lore. Plus, the deepfake situation is needlessly creepy. It might have worked better with an actual human performance- perhaps Marvel alum Sebastian Stan, who bears a notable resemblance to Mark Hamill at the relevant age. But the people behind this show are determined to avoid interesting choices, focusing their energy on empty appeals to nostalgia.