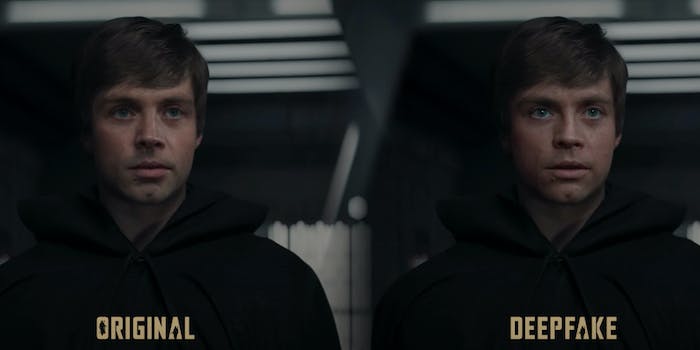 A new deepfake attempts to improve that ‘Mandalorian’ cameo

The final 10 minutes of The Mandalorian’s jam-packed season 2 finale were both exhilarating and exhausting (depending on your tolerance for nostalgia), but one fan has already attempted to improve upon The Mandalorian’s biggest cameo yet.

In “The Rescue,” Cara Dune, Fennec Shand, Bo-Katan Kryze, and Koska Reeves managed to capture Moff Gideon’s ship and kill all of the stormtroopers on board while Din Djarin defeated Moff Gideon in a battle that pitted the darksaber against a beskar spear and rescued Grogu. But the droid dark troopers that Din Djarin initially launched into space (and had trouble defeating) were back on the ship and ready to take everyone out up until a mysterious robed figure with a green lightsaber arrived on an X-wing and took out every single dark trooper. That person? Luke Skywalker.

Luke’s appearance was possible thanks to a CGI rendition of Mark Hamill’s face circa Return of the Jedi superimposed onto actor Max Lloyd-Jones’ face; Hamill provided the voice. But, like Rogue One’s inclusion of Grand Moff Tarkin and a younger Leia Organa in Rogue One and both younger Luke and Leia in The Rise of Skywalker, something felt a bit off about it.

A new deepfake video from Shamook attempted to rectify the uncanny valley of Luke’s appearance with tweaks to make the CGI rendering of Luke look even more like Hamill than before.

As far as digital tweaks go, it’s surprisingly effective. The changes are on the more subtle side, providing a far more familiar (and less jarring) depiction of Luke Skywalker.

It also helps that at least in the case of Luke, the original video got you most of the way there. But it still has some of the same problems that Lucasfilm’s original rendition of ROTJ-era Luke had (such as mouth movement), proving that just because some deepfake changes might look more accurate, it doesn’t always guarantee that it will completely improve on the original work.