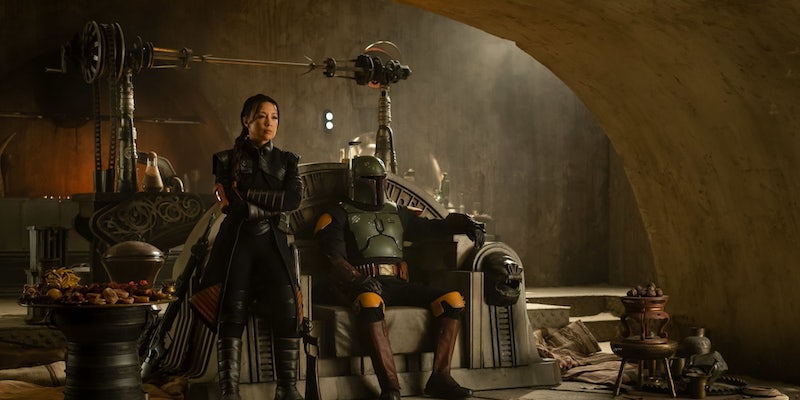 Four episodes into ‘The Book of Boba Fett,’ the show seems weirdly uninterested in Boba Fett

Even in an episode about the show's central relationship, 'The Book of Boba Fett' is frustratingly light on character development.

This recap includes spoilers for The Book of Boba Fett episode 4, “The Gathering Storm.”

As Rogue One so eloquently proved, a good prequel is all about the journey, not the destination. “Stealing the plans to the Death Star” is not an interesting concept in itself, but they found a way to expand this simple logline into a thematically rich, impressively suspenseful thriller. The Book of Boba Fett hasn’t learned much from this example, as evidenced by episode 4’s flashback-heavy narrative.

Fennec Shand’s role is one of the more puzzling elements of this show. Introduced in The Mandalorian, we still only know a handful of things about her: She’s a renowned assassin, Boba Fett saved her from a life-threatening injury, and now she’s Boba’s right-hand woman.

Unfortunately, Book of Boba Fett spent its first three episodes failing to give Fennec any further character development or even explain why she’s so loyal to Boba—a confusing oversight for viewers who didn’t watch The Mandalorian. And while episode 4 focuses on the origin story of their partnership, it barely covers any new ground.

We see Boba rescue Fennec and take her to a clinic for some non-consensual robot upgrades, something we already knew would happen. Then she accompanies him on a side-quest to retrieve his armor from the Sarlacc Pit, which feels like a metaphor for the show’s empty, nostalgia-fueled premise. And finally, she helps him raid Jabba’s palace, another rehash of a preordained event. We do get some fresh insight Boba’s motives for becoming a crime lord (apparently he’s sick of working for incompetent bosses), but the episode is mostly just a slower-paced retelling of old material.

As the series reaches its halfway point, there’s a growing sense that writer/showrunner Jon Favreau isn’t actually interested in Boba Fett. It’s a disappointing departure from the richness of most Star Wars tie-in novels and comics, which thrive on a palpable enthusiasm for expanding the universe. In recent years I’ve greatly enjoyed reading more about secondary characters like Poe Dameron, Chirrut Imwe, and Baze Malbus, and as a child, I was a big fan of the Jedi Apprentice novels, a YA series about Obi-Wan’s teen years as a trainee Jedi. By comparison, The Book of Boba Fett is truly giving us nothing. Minimal new worldbuilding, and virtually no exploration of the title character’s inner life.

It’s a bummer to be so negative about this show every week, but why did Disney spend so much money on this project when the writing just isn’t there?