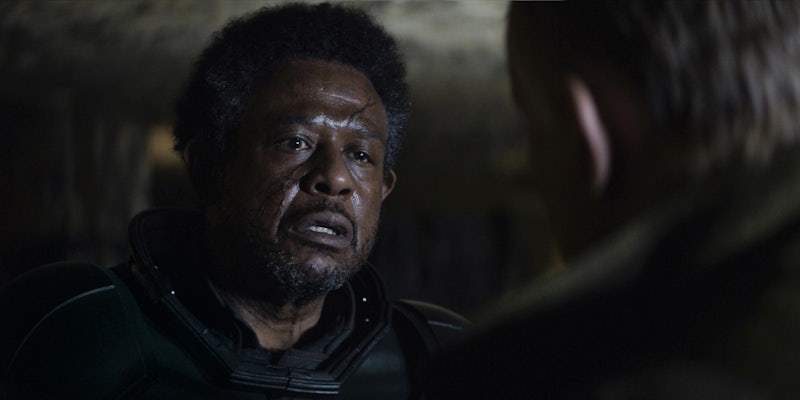 ‘Andor’ episode 11 sets an ominous tone for the season finale

Over the course of season 1, 'Andor' has dismantled our expectations for what it means to 'join' the Rebellion.

This post includes spoilers for Andor episode 11, “Daughters of Ferrix.”

Prestige TV creators love to describe their shows as “eight hour movies,” a trend that conveniently overlaps with the rise of streaming services trying to encourage marathon viewing. A lot of TV critics find this irritating because a) these shows don’t actually capture the pace or structure of a film, and b) an “eight hour movie” sounds pretty awful. Still, Andor undeniably feels like it was created by a filmmaker rather than a traditional TV showrunner.

Previously known for his work on the Bourne movies and Michael Clayton, Tony Gilroy split Andor into feature-length chunks (Ferrix, Aldhani, Narkina 5), echoing the mini-serial format of vintage shows like Doctor Who. Rather than functioning as a clearly-delineated segment, episode 11 mostly acts as a set-up for the finale—although that’s by no means a bad thing.

As Cassian and Melshi attempt to escape Narkina 5, Maarva Andor dies offscreen on Ferrix, prompting the Empire (and Luthen Rael) to exploit her upcoming funeral as a trap for Cassian. Despite the frequent references to her declining health, I still expected Maarva to go out with a bang—perhaps literally, as a suicide bomber targeting the Imperial HQ on Ferrix. Yet this quiet death is somehow very Andor, creating a tragic sense of unfinished business. When we lose someone we love, it always feels like we never got enough time with them. Here, the blow feels especially brutal because everyone else finds out before Cassian.

The pragmatic response here would be to avoid the funeral and lie low, but that isn’t how people work. It’s a perfect trap because Cassian will surely be compelled to go home and say goodbye. Between Luthen, Syril Karn, and the ISB, the show is setting up a very conventional kind of final-episode confrontation. But since Andor invariably opts for the less-predictable choice, we should expect the unexpected.

The return of Saw Gerrera is an intriguing wildcard element. In Rogue One, his role prompted us to consider that the Rebellion is not just a cleanly organized military structure. Revolution inevitably involves a variety of factions and tactics, some more palatable than others. While not as volatile as he’ll become in later years, Saw is already a fervent extremist (“I am the only one with clarity of purpose.”) who hides away in a cave full of weaponry. He and Luthen make interesting foils for each other: both ruthless leaders, and both paranoid in very different ways.

Over the course of season 1, Andor has systematically dismantled our expectations for how Cassian might “join” the Rebellion. In a more conventional story, Luthen would be the commander who welcomes him into the fold—much like how Jyn Erso is recruited in Rogue One. But after the Aldhani mission, Luthen sees Cassian as an unwanted loose end, tasking Cassian’s former teammates to surveil his home and (in theory) assassinate him. There’s no sense of trust or unity here. Rather than following an established path toward fighting the Empire, Cassian is making it up as he goes along.

Some of the show’s most impactful depictions of rebellion have no connection to a formal political organization. The prison riot on Narkina 5. The community resistance against Syril Karn on Ferrix. Bix Caleen’s stubborn silence during interrogation. Cassian’s history as a thief, sneaking into Imperial strongholds and stealing their technology. When he said in Rogue One that he’d “been in this fight since he was six years old,” he wasn’t referring literally to the Rebel Alliance. Andor retcons this into a more general statement about resisting authoritarian rule.

After learning of Maarva’s death, Cassian and Melshi decide to part ways—Cassian presumably back to Ferrix, and Melshi on a newfound quest to spread the word of what happened on Narkina 5. Thanks to Cassian, he’s transformed from a pessimist into a revolutionary, prologuing their future friendship in the Rebellion. And throughout all this, Karis Nemik’s manifesto has been sitting quietly in Cassian’s luggage on Niamos. When Cassian goes to pick it up, the datapad opens halfway through a sentence, suggesting that he may already have begun to read it.