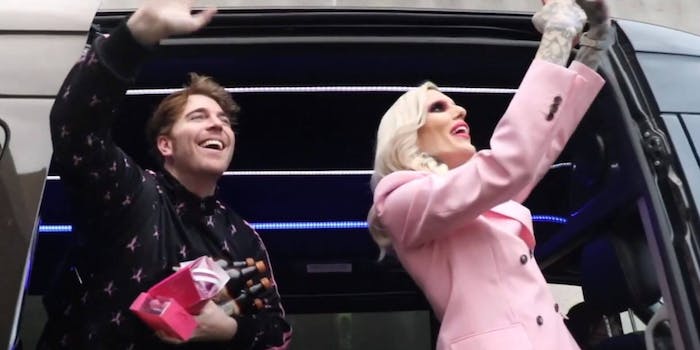 Millions of people are pumped.

It’s been nearly a year since Shane Dawson partnered with Jake Paul for an in-depth, documentary-style look into the controversial YouTuber’s life. And it’s been seven months since Dawson sent the culinary world into a tizzy when, as part of his series on conspiracy theories, he reheated an old theory about Chuck E Cheese’s pizza.

On Tuesday, though, Dawson got his immense fan base (and his 22.3 million YouTube subscribers) pumped about his next project, releasing a trailer for his new YouTube series called “The Beautiful World of Jeffree Star.”

Star, one of the most popular beauty vloggers on the platform with 16 million subscribers, has been embroiled in plenty of controversy in the past few years. He played a supporting role in the James Charles-Tati Westbrook feud that nearly brought down Charles’ beauty vlogging empire, he’s taken criticism for apparent cultural appropriation, and he’s been accused of racism.

But in the trailer, with American Idol star Catie Turner performing the song “Prom Queen,” Dawson and Star are shown embracing, traveling on private jets, waving to adoring crowds, and watching emotional videos from Charles and Westbrook. Other than that, it’s unclear what exactly the series will include.

But if the point of the trailer was to rile up the fanbase, it’s worked. About 12 hours after the video dropped, it had been viewed nearly 5 million times, and it was the No. 1 trending video on YouTube on Wednesday morning.

Clearly, the early response touched Dawson, who accumulated 175 million views for his eight-part series on Paul. On Tuesday night, Dawson tweeted, “so overwhelmed and happy that you guys are liking the trailer. :,) back to editing!! wish us luck! see u on Oct 1!”

so overwhelmed and happy that you guys are liking the trailer. :,) back to editing!! wish us luck! see u on Oct 1! pic.twitter.com/pOAufbZv5o

The series debuts next Tuesday.