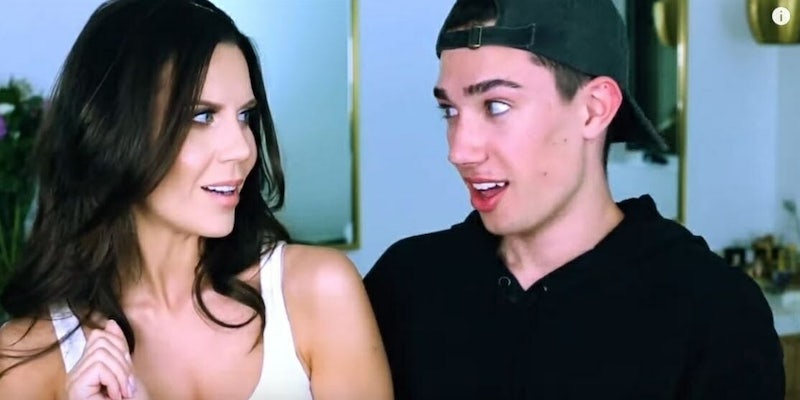 This feud has been such a rollercoaster ride.

Ever since Tati Westbrook dropped her explosive vlog against YouTube star James Charles on May 10, the platform’s beauty vlogging community has been in shambles. Ten days later, Charles has released a pair of his own videos and Westbrook and fellow YouTube star Jeffree Star have changed their vicious rhetoric against him—but the community still seems to be in disarray.

Charles is now gaining YouTube subscribers by the hundreds of thousands, while Westbrook is hemorrhaging a significant percentage of her newly expanded subscriber base. Major YouTuber influencers like PewDiePie and Keemstar have been defending Charles and saying Westbrook was in the wrong for making this a public issue. Now, the so-called “cancel James Charles” movement seems to have been canceled itself.

The ruckus began on May 10 when Westbrook published a video called “BYE SISTER” in which she explained how Charles had apparently wronged her for publicizing one of Westbrook’s business competitors and for apparently sexually preying on straight men. He apologized in his own video, but his YouTube channel was badly affected. He lost 1.2 million subscribers in a single day—something we’ve never seen before from the YouTube community—and more than 3.1 million overall.

Former friends like Kylie Jenner, Kim Kardashian, and Miley Cyrus unfollowed him on social media, while Westbrook reaped the benefits, gaining about 3.7 million subscribers in the four days after her initial video.

YouTube beauty vlogger Jeffree Star, another one of Charles’ good friends, also ripped into Charles on Twitter, calling him “a danger to society.”

It was a stunning fall for Charles. But soon the subscriber pendulum began to swing the other way.

Last Friday, Westbrook released another video that, as of this writing, has accumulated more than 21 million views. In her “Why I Did It” vlog, she said, “I feel like a very public conversation was had between myself and James Charles. I’m sad that it had to get to that, but he did publicly apologize, and I’m just hoping we can leave it at that and close this up. And that people can drop this, and move forward, and let some actual healing happen …”

On Saturday, Charles released a 41-minute response video in which he disputed some of Westbrook’s claims about the way he promoted a competitor’s business. He also showed video and text messages that he said proved that he wasn’t sexually harassing the men who she had mentioned, and he displayed messages in which Westbrook made jokes about him supposedly trying to have sexual encounters with straight men.

Since then, Westbrook has unlisted her “BYE SISTER” video, which has more than 50 million views.

Charles regained about 1.2 million subscribers this past weekend, and he’ll probably add a few hundred thousand more on Monday. Westbrook, meanwhile, lost more than 275,000 subscribers combined on Saturday and Sunday.

On Twitter, Westbrook said Charles’ latest video was “littered with so many lies and half-truths.” She said she stands by her videos. On Sunday, she was in backtracking mode, writing that she had been in touch with Charles and that she hoped they could put this matter to rest.

Star also said in a video that he hopes to move forward and apologized for his vitriolic social media messages. On Twitter, Charles wrote that he made the second video to clear his name but that he also wanted to move on with his life and career.

Thank you @jeffreestar & @glamlifeguru for your sentiments. I am on board to move on, will not speak about this further, but do hope to speak in the future when we’re all ready. This week was awful for all of us and I ask that the community focuses on positivity moving forward ❤️

The beauty community certainly has had a rough two weeks with all of this back and forth and with having to continually smash those subscribe and unsubscribe buttons. But Westbrook took a positive approach.

In her Twitter note, she wrote, “I hope that our community is somehow strengthened from all of this madness and that we will all strive to hold ourselves and each other to a higher standard.”