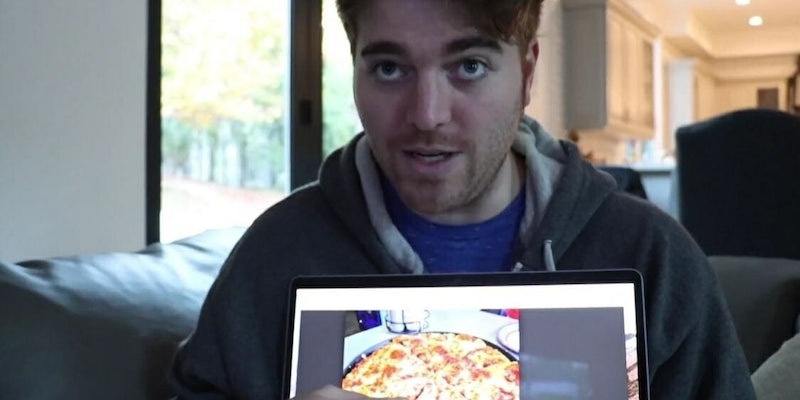 You might have expected Shane Dawson’s conspiracy theory documentary series to focus on UFO sightings or moon landings or how Barron Trump can reportedly time travel. You might not have expected the YouTube star to take on Chuck E. Cheese’s pizza.

In his video uploaded Monday, Dawson regurgitated a long-held theory about the pizza served at the famous child entertainment palace/restaurant. In the theory, it’s stated that workers at Chuck E. Cheese’s scoop up the leftover pieces that aren’t eaten by customers, bring them back to the kitchen, combine those pieces with other patrons’ leftovers, form them into a Frankenstein-type pie, reheat the used slices, and then serve them to new customers.

Dawson showed online photos of Chuck E. Cheese’s pizzas, and he pointed out how some pieces were longer than others in the same pie and showed how pepperoni didn’t correctly match up from one slice to the next.

Dawson visited a Chuck E. Cheese’s, and one of the first things he noticed was a sign reading, “Your pizza made fresh.” His party ordered three pizzas, and when they arrived, they were completely misshapen, leaving Dawson and his partner Ryland Adams literally slack-jawed.

Later at his home, Dawson broke out a ruler to give a real measurement to the pie. He didn’t like what he discovered. And he thinks he discovered the reason why the pizza didn’t look uniform.

“There is a reason,” he said, “and legally I’m not going to say what I think the reason is.”

Before explaining the theory, Dawson said, “I don’t know if anybody will care about it except for me.”

Chuck E. Cheese Employee: What would you like to order?

As of this writing, Chuck E. Cheese’s hasn’t responded to Dawson’s video. As noted by We the Unicorns, one Twitter user denied Dawson’s theory, writing, “I worked at Chuck E. Cheese’s and I have to say that the conspiracy theory from @shanedawson is so fake. The pizza slices move when they move it from where they cut it to the pizza platter. Especially when they place a large pizza into a Xlarge pizza platter.”

Here’s the second part of Dawson’s conspiracy theory docuseries, which has accumulated more than 7.7 million views since it was uploaded.

Or if you simply want to watch the Chuck E. Cheese conspiracy theory portions, YouTuber Lex Calia took the different pieces of the video discussing Chuck E. Cheese and reformed it into one video.

Update 2:29pm CT: In a statement given to the Daily Dot on Tuesday afternoon, a Chuck E. Cheese’s spokesperson strongly refuted Dawson’s claims.

“The claims made in this video about Chuck E. Cheese’s and our pizza are unequivocally false,” the spokesperson said. “No conspiracies here—our pizzas are made to order and we prepare our dough fresh in restaurant, which means that they’re not always perfectly uniform in shape, but always delicious.”