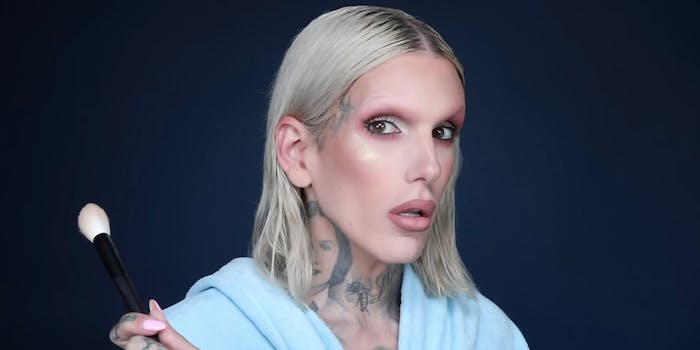 Jeffree Star gets slammed for cultural appropriation over cornrow hairstyle

But the criticism doesn't seem to have a lasting effect.

Jeffree Star faced accusations of cultural appropriation after tweeting a photo of himself wearing feed-in braids, aka cornrows, for a Jeffree Star Cosmetics photo shoot, Teen Vogue reported earlier this week. But the backlash doesn’t seem to be having a lasting effect.

Star, who’s known as a beauty vlogger, tweeted the photo on Sept. 27 with the caption “MONEY HONEY,” and posted another image with the hairstyle to Instagram the next day. Both were met with commenters slamming his hairstyle choice.

“It is appropriation,” one person wrote on Twitter. “It’s my culture. If I have to kill my hair with heat and chemicals to be accepted, but watch people wearing braided hairstyles, that originated from my ancestors, make money off of it and I get rejected for it… Something isn’t right.”

“I’m black and I don’t have an issue with it and neither does anyone in my family or my friends,” one user wrote. “All I see are white people having an issue with it. It’s HAIR.”

“Hahaha preach!!!” Star tweeted in response. “Young kids trying to be mad at something always.”

Star’s language and behavior regarding people of color has repeatedly been called into question. Last month, his former hairstylist said Star referred to fellow YouTuber Jackie Aina as a “gorilla” and used the N-word. He’s once said he wanted to throw battery acid on a Black woman to make her skin lighter.

Last year, Star admitted to making racist comments “to get a reaction” and apologized, saying “this is not who I am.” But as Teen Vogue notes, while other YouTubers have faced consequences (including the loss of sponsorships) over past racist behavior, Star mostly seems to carry on unscathed.