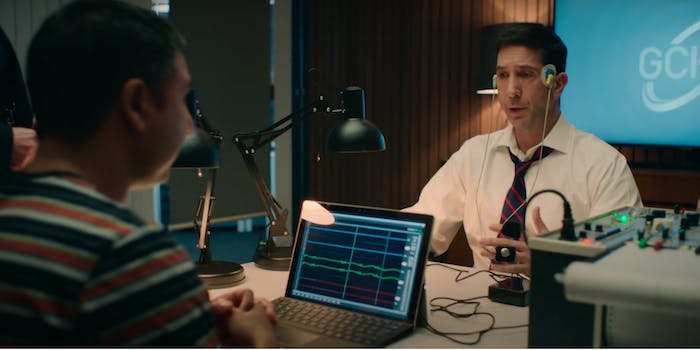 Peacock joins an increasingly crowded streaming space: This year’s already seen the debut of HBO Max and Quibi. Last fall was dominated by the rollout of AppleTV+ and Disney+. NBC (unlike, say, Quibi) already has brand recognition and shows with devoted fanbases, but its success will likely depend on whether potential subscribers want to shell out $4.99 to $9.99 a month for access to originals and live programming.

However, it’s also offering a free tier, with restricted access to content: about two-thirds of its total catalog, with ads. This could be its draw.

Here’s a rundown of all the originals you can expect on launch day, as well as previously announced programming.

A serial adaptation of Aldous Huxley’s 1932 sci-fi novel, Brave New World stars Alden Ehrenreich, Jessica Brown Findlay, and Demi Moore. It centers its story in New London, where society has been divided into strict hierarchies and there is no privacy, but citizens are allowed to ingest and participate in whatever bits of hedonism they like. Of course, not everyone is content. This is Peacock’s big get—the show was previously announced at Syfy and then USA Network—though reviews so far have been mixed.

A BBC crime drama, The Capture tells the story of a soldier accused of murder. As he maintains his innocence, a detective (Holliday Grainger) digs deeper and uncovers a conspiracy. Ron Perlman and Famke Janssen also star.

Psych might be one of the only sitcoms that’s also been able to support two feature films. Psych 2: Lassie Come Home follows up 2017’s Psych: The Movie, and finds Shawn (James Roday) and Gus (Dulé Hill) sniffing around the facility where police chief Carlton Lassiter (Timothy Omundson) is recovering after being shot.

David Schwimmer leads this British comedy as Jerry Bernstein, an arrogant NSA officer who lands in the U.K.’s Government Communications Headquarters, tasked with investigating cybercrimes. He’s tempered by Joseph (series creator Nick Mohammed), who’s able to buffer some of Jerry’s aggressiveness and makes the show more of a buddy comedy.

In Deep with Ryan Lochte

Ryan Lochte looks back at his swimming career, as well as the fallout from an incident during the 2016 Summer Olympics in Rio, in which he and three other swimmers were allegedly robbed at gunpoint—a story he later retracted.

The NASCAR star explores the history of abandoned race tracks across America.

Peacock will also have content for kids, and this series finds the titular scamp embarking on adventures.

The DreamWorks series follows the adventures of Cleopatra the teenager as she travels 30,000 years into the future.

A new season of the long-running animated series debuts on Peacock.