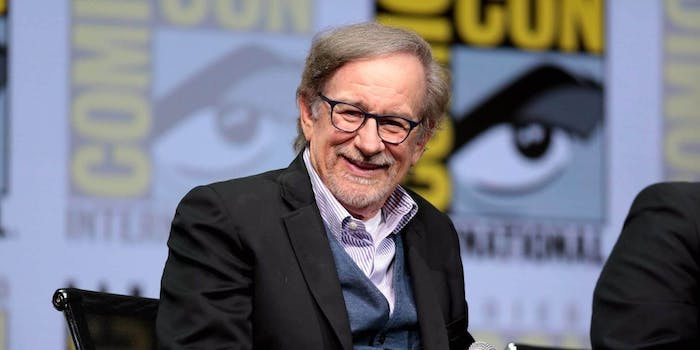 What is Quibi, the weirdest app in the streaming wars?

With $1 billion in funding, Quibi will deliver programming from Steven Spielberg and Guillermo del Toro in 10-minute "bites."

The streaming wars are in full swing, with Apple and Disney spending billions to compete with Netflix and Amazon. Plus, seemingly every TV network is launching its own subscription service. There are more streaming apps than you can shake a stick at, but the most interesting is certainly Quibi.

To clarify, “most interesting” is not necessarily a recommendation, since Quibi isn’t available yet, but it’s about to be. It’s launching April 6, with a 90-day free trial and a promise of “movie-quality shows designed for your phone.”

It’s attracted an impressive list of talent including Steven Spielberg, Guillermo del Toro, and Idris Elba without releasing any trailers. Quibi’s programming will range from traditional sitcoms and dramas to a remake of The Fugitive to a reality show where Chrissy Teigen presides over small-claims court. Oh, and all of these programs will air in 10-minute “bites.” “Quibi” is a portmanteau of “quick bites.”

Quibi banks on people not having time for a 45-minute or even a 20-minute TV episode. This contradicts the sprawling, hour-long-episode trend, which proved perfectly successful for shows like Stranger Things and Game of Thrones.

The concept tacitly buys into the idea that young people especially have short attention spans, since Quibi is targeting 25- to 35-year-olds. Quibi’s creators—68-year-old former Disney chairman Jeffrey Katzenberg and 63-year-old former Hewlett-Packard CEO Meg Whitman—persuaded investors including Disney, Sony, Viacom and WarnerMedia to buy in. The pair has brought in funding to the tune of $1 billion. They’re hoping for another half-billion before launch, Variety reported.

Unlike other streaming services, Quibi doesn’t benefit from hosting favorites like Friends or the Marvel franchise. It features all new programming, divided into chapters lasting 10 minutes or less. One key selling point for filmmakers is regaining the rights to their Quibi movie after two years, Variety reported. Then, filmmakers can reassemble the bites into a traditional feature film. In the meantime, Quibi funds their production costs.

How much will Quibi cost?

Explicitly aimed at mobile users, subscriptions will cost $4.99 per month with ads or $7.99 without. Comparatively, Quibi is slightly cheaper than other streaming services. Disney+ will be $7.99 per month. Amazon Prime is $12.99 per month including various Amazon services. Netflix is $8.99 per month for a basic one-device plan.

Quibi has already sold $100 million in ads, which follow a model similar to YouTube. Six to 10 seconds of nonskippable ads will appear on videos under five minutes, and viewers would see roughly 2 1/2 ad minutes over an hour of programming, CNBC reported. At Cannes Lions, Katzenberg said serialized ads might be a good way to target Quibi’s millennial audience. A 60-second commercial could be split into four chapters that arrive alongside four Quibi segments, for example.

Considering how much people hate the threat of ads appearing on Netflix, will millennials really sign up for a streaming app with ads (albeit short ones) every five minutes? Or will this just persuade people to sign up for the ad-free model?

What can you watch on Quibi?

Quibi’s catalog is, in a word, wild.

Steven Spielberg is making a horror series that you can only watch after sunset. Glee star Darren Criss is teaming up with his A Very Potter Musical collaborators for an original musical comedy. Idris Elba will do a stunt-driving show. Liam Hemsworth will star in an action thriller. Guillermo del Toro is making something involving zombies. A reality show called Murder House Flip combines true crime and home renovations. However, it sounds like an unintentional satire on the American housing market. Other programs will feature Sam Raimi, Lena Waithe, Dwayne Johnson, Jennifer Lopez, Jason Blum, and more.

This doesn’t even cover half the programming that’s been announced so far.

Some projects are shows while others are serialized films, like a sex doll comedy starring Anna Kendrick. Some sound like a nightmare to watch with ads interrupting periodically, like a family drama about suicide by Green Book’s Peter Farrelly. The question is, do you want to watch one “bite” of a Naomi Watts thriller while queuing for the bus? Or would you prefer to kill time by checking Instagram or texting your friends?

Quibi combines massive investor funding with appealing programming, but the central gimmick remains dubious. Is the world really crying out for a streaming app where everything is split into super-short chapters? Young people love YouTube and TikTok, but they also loved Avengers: Endgame, which is three hours long. Not to mention the popularity of marathoning entire Netflix shows when they come out.

We have to assume Quibi did plenty of market research behind the scenes, but from the outside, there’s no obvious sign that audiences want TV shows and movies chopped up into bite-size chunks. People appreciate convenience—hence Netflix’s popularity—but Quibi’s format risks disrupting the immersive experience of a traditional TV storytelling. Rather than catering to a short attention span, it’s potentially encouraging one. It also encourages the idea that entertainment (including high-quality storytelling from creators like Spielberg and del Toro) is something to slot into a 10-minute gap in your busy schedule, not something to sit down and appreciate.

As everyone should understand by now, investor funding doesn’t always equate to a good idea—or a profitable one. People invested in Fyre Festival and Juicero. Investors continue to pour money into Uber, a company plagued by scandals and security concerns and has never turned a profit. Even Netflix, which actually is a decent product that people enjoy, is massively in debt. Quibi is gambling a billion dollars (at least) on the prediction that millennials want TV and movies to be the same length as a music video and that they’ll subscribe to a whole new platform for that service.