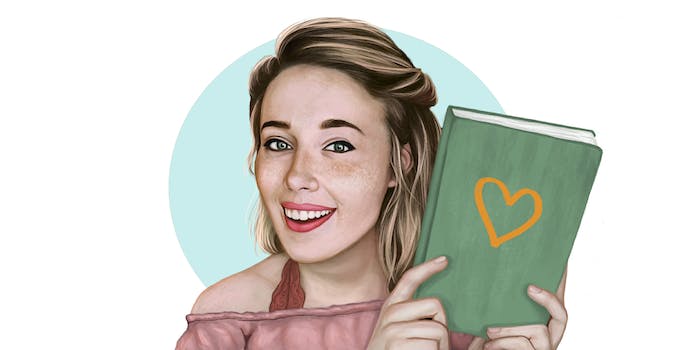 On the cusp of graduation, Perusse invites her audience along for her next big chapter.

Four years ago, Regan Perusse started her channel (Peruse Project) for the age-old reason most BookTubers join YouTube: She wanted someone to talk about books with. Now on the cusp of her University of Texas graduation, and about to move across the country for her dream advertising job, Perusse has become a force within the very community she stumbled into.

Many BookTubers have been featured in this column: Jen Campbell, Ron Lit, Ameriie, Books and Quills, Leena Norms, and Ariel Bissett among others. I’m a massive bibliophile, sure, but that’s mostly due to the evolution of this community.

From the development of BookTubeAThon to original tags promoting diversity, the popularity and creativity of these talking heads has forged a thriving sub-community that’s shown up IRL at VidCon panels. In other words, from many book nerds looking for something to read, comes an inclusive circuit of friendly faces with the same geeky impulses and questions you have.

In just five years, BookTubers have enabled discussions and changed the way literature is viewed and consumed in the age of digital media. With voices like Perusse leading the charge, viewers can dive deeper to crevices within this niche community and find critiques about genres like historical fiction and fantasy—two of her specialties.

With an affinity for fashion as well as literature, Perusse’s videos provide vibrantly enthusiastic, yet honest, reviews of what should stay and what should vacate your booklist. Her quirky personality, and stylish eye, have helped double her subscriber count in a year. In an interview with ANDPOP, Perusse revealed that she often shoots her videos in one take—a habit developed while balancing the demands of a growing YouTube audience with the pursuit of two degrees. It’s refreshingly transparent.

Whether you’re a fantasy buff or a nonfiction groupie, BookTube has a haul for you—reading chair not included. Scene leaders like Perusse remind us that it’s not only OK read, but it’s a necessary mental escape. As an adult, few of us have the time to join a book club or take classes that allow us to discuss the symbolism of The Handmaid’s Tale. This is why channels like Perusse’s continue to thrive. They provide a safe space for viewers to learn and engage from anywhere in the world.