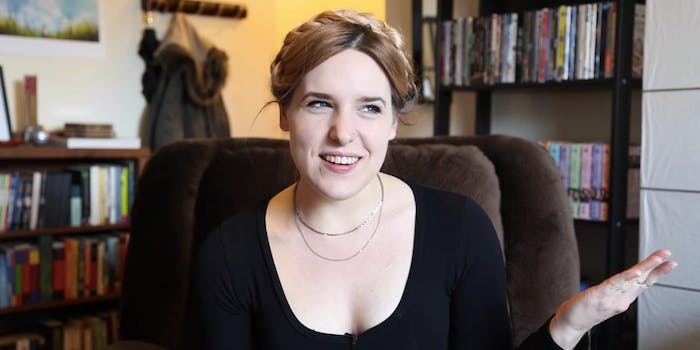 Ron Lit will do the impossible: Make you want to read the classics

This week's #WCW is an open book.

Allow me to fangirl for a minute. As a woman who always carries a book in her purse and named her cats Fitzgerald and Hemingway (neither cats are alcoholics, for the record), creator Ron Lit is one of my YouTube heroes.

A major influencer among YouTube’s BookTube community, Ron (short for Veronica) releases a new video every Thursday that explores the world of literature, in her own hilarious, off the wall way. Her channel library include book tags, literary theory, book reviews, Jane Austen fangirling moments, book hauls, discussions, and musing about how classical literature has shaped our world today. In short, Ron is the English teacher you wish you had growing up.

An English doctoral student, Ron originally started her YouTube channel after months of persuasion from her sister Shannon, who shoots and edits all of the channel’s videos. In the two years since the channel went live, the two sisters have gained close to 10,000 subscribers and started major discussions with viewers around the portrayal of race, gender, and sexuality in literature. But unlike your 10th grade English teacher, Ron generates discussions in her own hilarious way: “I wanted to curl up and die, it was so racist,” she says of one subject, and Jane Austen is “a fucking baller.” And on top of that, she loves cats and wine?! It’s almost too much for my bibliophilic heart to bear.

Much like the education channel Thug Notes, Ron breaks down classic literature and complex literary theory in a way that is accessible and enjoyable for the viewer. Every time I watch her videos, I always find myself scribbling her book and comic recommendations all over my notebook in an attempt to keep up with her unquenchable appetite for reading.

In one of her most popular videos, “Women in Detective Fiction,” Ron explains the evolution of female characters in detective novels and leaves the viewers to question why Arthur Conan Doyle’s representation Irene Adler from over 100 years ago is somehow more progressive than her character in today’s popular Sherlock series. Ron’s made book lists inspired by Jeff Goldblum movies and Britney Spears’ life phases, she’s explained the literary theory surrounding the grammar in Mean Girls, and she has proved countless times why Jane Austen is a feminist writer we should all be paying more attention to. And her badass literary boss ways are only going to continue as she ventures into the world of scripted narrative content.

Ron recently released the trailer for her upcoming webseries Adulthood and Other Lies. The series will follow the life of a Ph.D. student and her misadventures through the world of books, sleep deprivation, books, endless writing, crushes on girls, wine, more books, crushes on boys, all the wine, etc.

While she’s best known for her videos on literature, Ron has also used her channel to talk openly about her past struggles with eating disorders and her road to recovery. In past interviews, Ron has shared that it’s her passion to spread body positivity and provide resources and support for others battling her same disease.

A future English professor, vocal advocate for body positivity, and hilarious bibliophile, Ron is one of the most worthwhile people on the platform. So go subscribe! Your bookcase will thank you later.