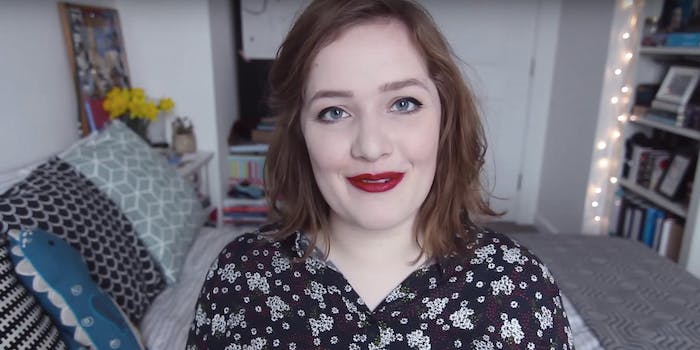 Level up your bookcase with Sanne Vliegenthart.

I may write about my woman crushes every week, but before sitting down to begin this piece, I found myself fangirling to such a level that I began to feel like a Taylor Swift fan who’d just been surprised with concert tickets.

Started by Sanne Vliegenthart in 2008, Books and Quills is one of the freshest, most comprehensive BookTube channels on YouTube with videos that engage readers from all genres and interest levels.

For those unfamiliar with this subcommunity, BookTube is a niche group of YouTube creators whose channels are focused primarily on books—including reviews, tags, hauls, deep dives, and once a year, BookTubeAThon, a reading challenge started by past #WCW Ariel Bissett.

Originally from the Netherlands and now based in London, Vliegenthart has made a name for herself among the BookTube crowd with her honest book reviews (not everything gets a gold star), quaint and colorful filming aesthetic, and most importantly, her explainer videos on book publishing. Her graphic novel hauls have received particular notice, as she frequently updates viewers on new releases and influential works within this growing community.

The current social media producer for Penguin Random House UK, Vliegenthart has used her videos to explain epigraphs, how book covers work, as well as ways to increase your reading habits and stay organized with work.

Have you seen these Bronte beauties from @vintagebooksuk yet? I've got a set to give away! Follow, comment and like before 10 November midnight GMT and I'll pick a random winner. (UK & Ireland only) #bookstagram #classics #literature #brontesisters

For me, Vliegenthart is a whole package that speaks straight to my bibliophilic soul. Her book hauls have increased the size my library by easily 40 or 50 books (nevermind my pint-sized New York City apartment) while her blog and Instagram have established her as well-rounded lifestyle blogger I greatly enjoy following. Through YouTube, Vliegenthart has also shared tips and advice for moving abroad and the growing pains that come from living so far from home.

While I realize not everyone shares my insatiable appetite for literature, the power of Vliegenthart’s content is that there is something for everyone—from the new reader to the person whose floors will someday collapse under the weight of their bookshelfs. That isn’t an easy balance to strike, and yet, Vliegenthart bridges genres and authors from all parts of history, inspiring you to put down your phone and dive into a world not constrained by 140 characters.