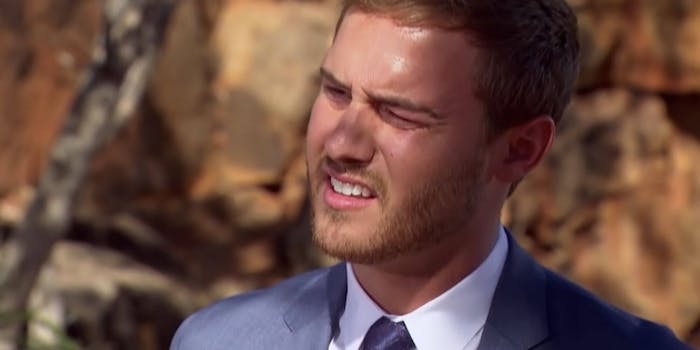 Will ‘The Bachelor’ end without an engagement?

Everyone watching usually knows what to expect. But this time, that may not be the case.

After 23 seasons of The Bachelor, plus an additional 15 of The Bachelorette, there aren’t many surprises anymore. The players may change, the drama may vary ever so slightly, but the reality franchise is a well-oiled machine, and everyone watching knows just what to expect.

Only this time, that may not be the case.

Fans are becoming more and more convinced that the latest Bachelor, Peter Weber, finishes out his season without getting engaged to any of the remaining contestants, a rarity for the show.

Weber has already gone on record claiming that the ending to his season is unable to be spoiled, something that’s definitely unheard of for The Bachelor. Whether it’s through Reality Steve infamously tracking down the answers or a clever fan figuring out who ends up together via Venmo, it seems like it’s always possible to find out who gets that final rose before the episode airs.

So in order for it to go unspoiled, it seems like there must be some sort of sharp pivot away from the familiar formula Bachelor Nation has come to expect and for things to have taken a truly unpredictable turn.

“There’s only one theory. The only way you can’t spoil it is he didn’t make a decision,” former Bachelorette Kaitlyn Bristowe suggested to E! News.

Many former contestants gave up the game by getting seen with the person they chose while the season was still airing or interacting with them online. It’s very, very easy to get caught. So Bristowe’s theory tracks.

Adding fuel to the fire is Weber’s refusal to confirm in interviews that he’s engaged at all, something prior Bachelor contestants have had no problem doing. Of course, if he doesn’t end up engaged, he won’t be the first Bachelor to make that decision, though all the others at least made some sort of choice by the end.

The unknown is driving fans crazy, with everyone sharing their own theories as to how Peter’s love story will end.

While Reality Steve claims the season finale will air in two parts on March 9 and 10, ABC has yet to issue a confirmed finale date. Weber is currently down to the final handful of women. While one would normally assume this means we can look forward to seeing which one he picks in a couple weeks, at this point, no one knows what to expect.

It seems that even after 18 years, The Bachelor can still throw a curveball. Or at least, they can convince us that they will.