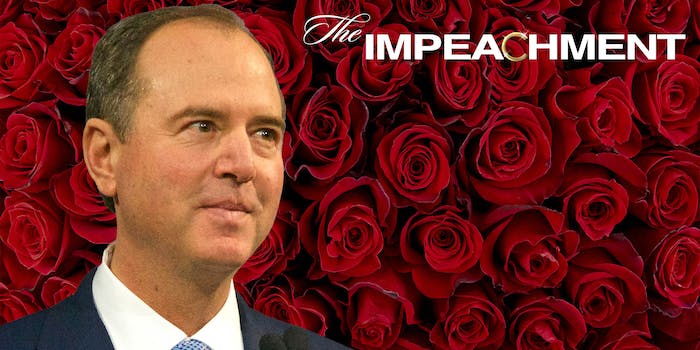 Are these tweets about ‘The Bachelor’ or Trump’s impeachment?

They could also be a very weird mash-up.

At this moment in time, millions of Americans are captivated by a historic tribunal. The proceedings, focused on one man, have already featured devastating rumors, betrayals, and innuendo. We’re all expecting some midnight creeping, but in truth, no one knows what will happen next.

The only thing that’s certain is that when it’s all over, his life, and possibly ours, will be changed forever.

This is The Bachelor, where anything can happen.

But it’s also a fair description of the impeachment trial of President Donald Trump.

Likewise, on Twitter, it can be surprisingly difficult to tell whether someone is subtweeting impeachment or The Bachelor. Tweets like, “I think my brain is bleeding,” and, “That is…the whitest room I have ever seen, and I grew up Southern Protestant,” could really go either way.

Hm. Is that baby excited to see the please-god-make-it-stop conclusion to #ChampagneGate? Or, after watching 12 solid hours of impeachment, are they just hoping that God makes it stop?

‘I tried to listen to this mess, I just couldn’t take it’

This fine fellow might be watching Pilot Peter pretend to care about that one girl’s sad backstory, or he could be listening to Trump’s counsel mount his defense. It’s impossible to be sure.

‘Your freestyle raps are destroying this family’

Your freestyle raps are destroying this family

Well, as we all know, the contestants on The Bachelor are encouraged to showcase their talents and not-so-talents, which have literally included freestyle rapping.

Then again, yesterday a sitting Congressman quoted the Notorious B.I.G. on the Senate floor.

Cincinnati Bengals quarterback Andy Dalton providing impeachment evidence would actually be less surprising than, say, a former landscaper being accused of surveilling of a United States ambassador. But an NFL quarterback would also be a great get to star in the 25th (!) season of The Bachelor. Unfortunately for ginger lovers everywhere or, er, somewhere, Dalton’s married. Gardner Minshew, however, is free as a bird. Just sayin’.

An argument about the use of the word ‘stupid’

Hard to deny that there’s plenty of stupid on both fronts, and not much engaging in good faith.

Derek Peth, a former contestant, knocks on doors for Warren

Elizabeth Warren got his rose. https://t.co/kFxuhEnoQQ

Next week, Sen. Elizabeth Warren (D-Mass.) presents her plan to win Derek’s heart … and vote Trump out of office.

1. He heard this on West Wing
2. He got the quote wrong
3. No one is banging anything with that beard pic.twitter.com/H6rgePfLTj

How can Sen. Ted Cruz (R-Texas) be expected to get his quotes straight when, just like contestants on The Bachelor, senators aren’t allowed to use their phones when Congress is in session? Heck, Sen. Marco Rubio (R-Fla.) was reportedly taking notes with a quill pen yesterday.

Actually, this is a killer idea for an episode of The Bachelor where the contestants dress up like the Founding Fathers, which would also be truly excellent attire for the Senate when they cast impeachment votes.

Day three of impeachment trials continues today, but episode four of The Bachelor isn’t until next Tuesday night.