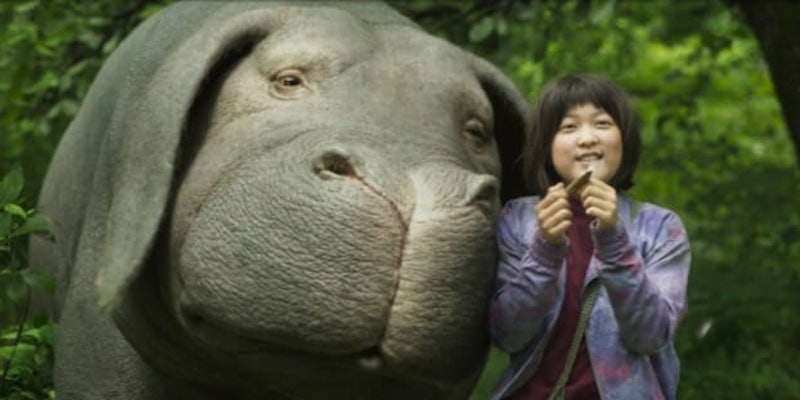 ‘Okja’ is an ambitious, action-stuffed blockbuster about a girl and her pet pig

In a summer full of prequels, sequels, and threequels, Netflix's 'Okja' is a revelation.

Korean auteur and world cinema treasure Bong Joon-ho first made a splash in the U.S. with his 2006 monster movie The Host. It’s a rollicking story that drew comparisons to Spielberg’s Jaws. It speaks to Joon-ho’s ability to transcend genres as well as his filmmaking prowess. After making some darker movies (Mother, Snowpiercer), Joon-ho is back with the Netflix-produced Okja, which he directed and co-wrote with Jon Ronson.

Okja is peak Joon-ho. It’s a movie about a girl and her pet super pig (you read that right). It’s also a satire of… something. I’m not entirely sure if the target is corporate America or the food industry. I just know it’s potent when the first thing a foreign character sees in the U.S. is a cemetery. Regardless of the film’s hit-to-miss ratio, it casts a wide net. On its face, Okja should be Joon-ho’s most widely appealing film yet, but it doubles down on its weirdness in ways that are sure to keep it from finding the sizable audience it deserves.

So, what is Okja? It kicks off with business executive, Lucy Miranda (Tilda Swinton), describing her company’s plan to help combat hunger by creating a line of genetically enhanced super pigs. There are 26 piglets distributed all over the world. After 10 years Miranda will check up on the pigs and crown a “winner.” Cut to 10 years later, in South Korea, where Mija (Ahn Seo-hyun, just awesome here) lives with her father and their super pig Okja. Okja and Mija are inseparable and relate to each other in a way that will remind viewers of  E.T. Mija, of course, does not know about the contest and is distraught when Miranda’s goon squad comes to take Okja to New York. Mija leaves her home to follow Okja, and we’re off and running.

Joon-ho is always great when it’s time to deliver the goods and he doesn’t disappoint here. The chase sequence through the streets and stores is one of the best action scenes of the year. The tonal hodgepodge of the first act (and the rest of the film) can have a whiplash effect on people not familiar with Joon-ho’s style. But it’s deeply rewarding and technically dazzling.

Unsurprisingly, the corporate competition isn’t what Miranda presents, so of course there are animal rights activists involved. The group, ALF (Animal Liberation Front), is led by Jay (Paul Dano in a heavyweight performance). ALF instigates most of the film’s major setpieces. They’re an eclectic group of anarchic pacifists (featuring familiar faces Lily Collins and Steven Yeun). Jay is the only character who matches Mija’s sincerity, and his role leaves a mark.

The story and characters go transcontinental, but no matter how wide the scope of the film gets it maintains a sense of intimacy because of Mija and Jay. Joon-ho excels at creating emotional throughlines to anchor his films. It also allows him to indulge, with characters like Jake Gyllenhaal’s eccentric, animal-loving TV personality. I’ve seen the movie twice and Gyllenhaal isn’t essential to its story at all. But his goofy voice and manic mannerisms still make me laugh.

The movie doesn’t quite maintain the exhilaration of the Korea-set section, but not for a lack of trying. Ultimately the film’s individual pieces are greater than their sum. It’s an uneven whole that was stirring enough for a four-minute standing ovation last month at Cannes.

I thoroughly enjoyed Swinton’s performance as Lucy and, later in the film, Lucy’s sister Nancy, even though I never cared about the corporate side of the story. Put another way, there is something for everyone in Okja. There’s action, family drama, and comedy. There are emotional moments. Not the kind shoehorned in that pander for easy reactions, but legitimate, might-make-you-burst-into-tears moments. It’s a smorgasbord of cinema. In a summer with multiplexes full of prequels, sequels, threequels, and beyond, Okja is the proverbial breath of fresh air.

It’s a shame that Okja isn’t getting the proper U.S. theatrical run it deserves, but debuting it on Netflix means it’s available to a wider audience. Hopefully people will give it a shot, because it’s one of Netflix’s best releases. More than that, Bong Joon-ho is a filmmaker more people need to know about, regardless of how they come across his work.