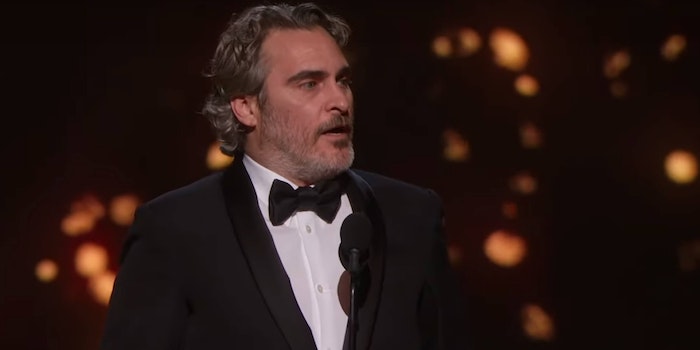 'We feel entitled to artificially inseminate a cow.'

Joaquin Phoenix won the best actor Oscar for Joker, as predicted. Perhaps less predictable was that his acceptance speech would include him riffing on cow insemination.

Phoenix used his previous BAFTA speech to call out institutional racism, and on Oscar night, he addressed speciesism and animal rights. “I think we’ve become very disconnected from the natural world,” he said, pointing out the entitlement in taking a cow’s milk for our coffee. “We feel entitled to artificially inseminate a cow and when she gives birth, we steal her baby. Even though her cries of anguish are unmistakable.”

He also touched on cancel culture, his own past behavior, and the people who gave him a “second chance.”

The speech took some by surprise, though Phoenix, a longtime vegan, has been doing some behind-the-scenes activism during awards season, starting with the Golden Globes going plant-based. Still, the milk thing was a tipping point.

The Joker, today: Milk is the real enemy.

We just went from racism to oat milk ok!!!

Joaquin Phoenix is really out here at the #Oscars lecturing us about how we oppress cows for their milk pic.twitter.com/LmOmqVMXME

When The Joker started talking about milk. #oscars pic.twitter.com/Wi5SkRevrX

Even People for the Ethical Treatment of Animals (PETA) chimed in.

“JAW DROP. Sending a HUGE congratulations to #vegan Joaquin Phoenix for winning Best Actor,” the animal rights organization tweeted. “Joaquin has dedicated his life to ending speciesism and that speech was proof that he is never afraid to speak up for ALL beings.”

Joaquin has dedicated his life to ending speciesism and that speech was proof that he is never afraid to speak up for ALL beings. #Joker #Oscars #EndSpeciesismpic.twitter.com/FUJ6xPfSjD

The #Joker star has participated on the ground alongside other activists in several PETA demonstrations & other #AnimalRights protests. That's just one of the many reasons he was named PETA's 2019 Person of the Year! #Oscars pic.twitter.com/di0owDXVNf