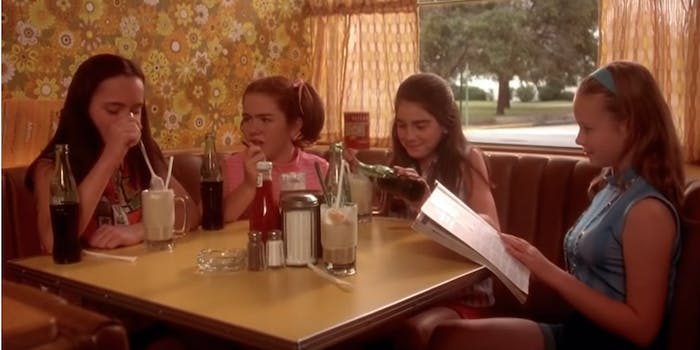 ’90s favorite ‘Now and Then’ is headed to Netflix

You'll be able to stream the coming-of-age classic in August.

Drop Dead Gorgeous is finally streaming on Hulu, and now another ’90s cult classic, Now and Then, is headed to Netflix in August.

The 1995 film stars Melanie Griffith, Rosie O’Donnell, Rita Wilson, and Demi Moore as friends who reunite in small-town Indiana and find themselves looking back on the summer of 1970, “when everything started to change.” The characters’ younger versions are played by Gaby Hoffmann, Christina Ricci, Thora Birch, and Ashleigh Aston Moore. There are also appearances from Devon Sawa, Hank Azaria, Brendan Fraser, and Rumer Willis.

The film was directed by Lesli Linka Glatter, who went on to direct episodes of Homeland, True Blood, and Freaks and Geeks. It was written by Pretty Little Liars showrunner I. Marlene King. In 2012, King started putting together a series reboot of the film for ABC Family, but it never materialized. She told Entertainment Weekly in 2015 that execs wanted the remake to be set in the present day, with flashbacks to the ’90s, and she “felt that kind of ruins how special the movie is.” Indeed, the movie still has a place in people’s hearts, even if it was mostly panned by critics when it debuted. It depicts a time in a girl’s life when friendship is crucial and has a different context when you rewatch it as an adult.

Grab your bikes and find your best friends because "Now and Then" will be available to stream on Netflix US starting August 1 pic.twitter.com/cayBZjS63B

"Now and Then" will be on NETFLIX in August pic.twitter.com/3RoYGLnpfi

King recently inked a deal with 20th Century Fox TV, so it’s very possible Now and Then will end up there. In the meantime, keep manifesting your dream reboot cast pairings.

You can watch Now and Then on Netflix starting August 1.