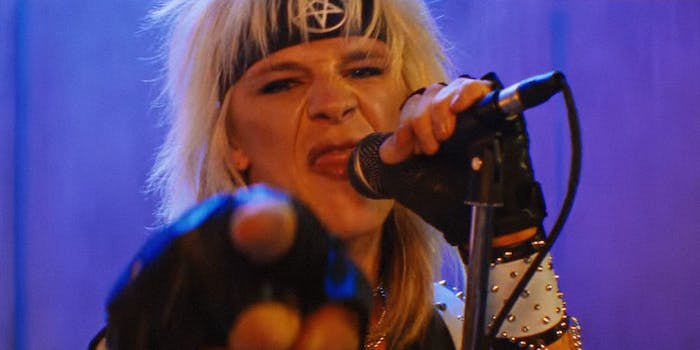 ‘The Dirt’ offers a sanitized history of Mötley Crüe—but why?

'The Dirt' looks at the glam metal band's ascent but lacks any deeper context.

The Dirt introduces us to Mötley Crüe as just a “gang of fucking idiots” and then tries to get us emotionally invested in them. It succeeds to a certain degree, but the biopic works a little too hard to suggest that they were really just good boys from broken homes who got sucked into the void of music industry excess.

Based on the 2001 tell-all of the same name, co-written with Neil Strauss, The Dirt cherrypicks stories of bad behavior and copious drug use in ‘80s Los Angeles and plays them out with the band’s stand-ins: Douglas Booth as bassist Nikki Sixx; Colson Baker, aka Machine Gun Kelly, as drummer Tommy Lee; Iwan Rheon as guitarist Mick Mars; and Daniel Webber as singer Vince Neil. Jeff Tremaine directed The Dirt, and he certainly knows how to frame a gang of fucking idiots from his work with the Jackass franchise. The opening scene and a scene in which Ozzy Osbourne (Tony Cavalero) snorts a line of ants by a pool yanks the Jackass thread in a different, more dramatic direction.

The film also mirrors the book’s unreliable narrators, hopped up on their rock-star mythos. Different band members break the fourth wall during certain scenes to address the validity of memories. Mars’ interjections prove the most welcome, as Rheon’s no-bullshit portrayal offers some comic relief. A scene in which Lee recounts how his days on tour unfold drills down into the emptiness of fame. The Dirt doesn’t get much into the origins of their songs—halfway through the film, Lee starts to play the opening notes of “Home Sweet Home” on the piano and then it’s never revisited again—but the culture around them, and the handlers who enabled some of their behavior. Still, it’s only a surface exploration. (Pete Davidson’s portrayal of Elektra Records’ Tom Zutaut is a head-scratcher, though.)

It gets into the dark stuff: Sixx’s spiraling heroin addiction, Neil’s 1984 drunk driving accident that killed Hanoi Rocks drummer Nicholas “Razzle” Dingley, for which Neil received just 30 days in jail but served less. (Credit to Webber for a more nuanced, emotional performance of a glam metal frontman.) When Lee punches his fiancée on a tour bus, he reacts over-dramatically, as if he’s the victim. He’s just a “hopeless romantic,” something he reinforces a couple times throughout the film.

This is where it feels like The Dirt looks away. In the book, Lee and Sixx (who were labeled the “Terror Twins”) recount taking turns having sex with a barely conscious woman in a closet, which Sixx eventually concedes was rape. Then there’s the one about how they made a woman insert a phone receiver into her vagina and then call her mother. In the book, the band explains this away as rockstar posturing, but the deep-rooted misogyny is always in the margins. I get why these stories are left out, but having Sixx slide in at the very end of the film with a “We did things we regret…” speech while the band walks in slow motion, slapping each other on the back as they return to the stage, feels like a cheap shot.

Tremaine told Rolling Stone he wasn’t that “worried” about how the film would be viewed today; in that same interview, Sixx now claims that he now doesn’t “actually recall” the closet story and blames it on his non-sober state while doing interviews for the book. It seems the revision of Mötley Crüe is happening on a few levels.

So what are we to make of this in a new era of the blockbuster music biopic? Is The Dirt supposed to tell us something deeper about an industry that feeds into abuse and sexism and enables addicts? Or just that Mötley Crüe fucked a lot? If this is the foundation for a comeback, it’s weighed down by some cognitive dissonance.