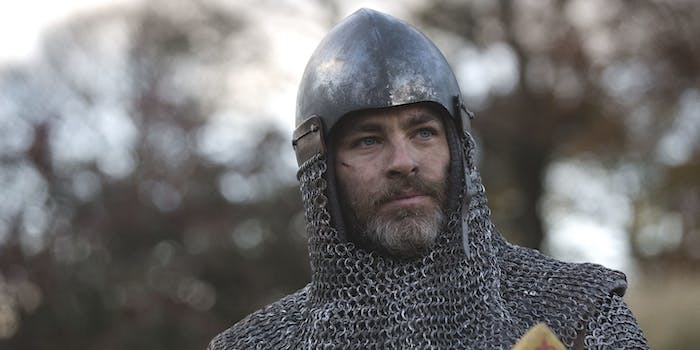 After years of brutally dour historical action movies and tongue-in-cheek parodies à la Guy Ritchie, it’s refreshing to watch something so sincere. Outlaw King positions Robert the Bruce and his allies as quintessential underdogs, fighting impossible odds to free their country from oppression. You couldn’t ask for a more obvious hero/villain divide. Robert is an honorable man of the people, displaying tactical prowess, beautiful blue eyes, and a quiet respect for women. Meanwhile, English villain Edward II (Billy Howle) is a sniveling, immature tyrant with an unflattering bowl cut. His men are thugs and riot cops in shining armor, demanding exorbitant taxes and brutalizing Scottish civilians. Scottish director David Mackenzie makes no attempt at a “two sides to every story” retelling—and really, does anyone actually need one?

Picking up where the highly overrated Braveheart left off, Outlaw King opens with William Wallace’s defeat and the Scots’ surrender to England. Soon deciding that peace is impossible, Scottish nobleman Robert the Bruce declares himself king and raises a guerrilla army to fight for independence. Surprisingly, the screenwriters skipped Robert’s greatest hits (the Battle of Bannockburn and the spider in the cave legend), opting for a shorter story about his initial rise to power.

In fairness, a full Robert the Bruce biopic would probably require miniseries treatment. The Wars of Independence lasted for decades, with plenty of epic battles and political intrigue as Robert cemented his position as a respected leader. There simply isn’t room for all that in a two-hour movie, although Outlaw King still could have used its time more wisely. Why not flesh out the supporting cast, or delve a little deeper into Robert’s personality and political acumen? This is a guy who read history for tips on leadership and set up a parliament as soon as he took power. Outlaw King portrays him as a rather basic warrior hero, although Pine is charming enough to pull it off.

One doesn’t expect deep historical insight from this kind of movie, so I’m satisfied enough by the authentic costumes (Robert wears long tunics and chainmail, not a kilt) and mostly accurate timeline. (Pine’s Scottish accent is great, by the way, although this is another fictionalized detail: Modern English didn’t exist in the 1300s.) The film may also owe its shallow characterization to a recut following its poor reception at TIFF. The version I saw at the London Film Festival is 20 minutes shorter, and you have to wonder how many scenes with Robert’s friend James Douglas (Aaron Taylor-Johnson) and wife Elizabeth (Florence Pugh) wound up on the cutting room floor.

As anyone who saw Lady Macbeth knows, Pugh is a tough and charismatic actress, and her performance here transcends what I can only describe as a mid-level Wife Role. Meanwhile, Taylor-Johnson receives second billing in the cast but ends up not being a major character in the final cut. That’s strange, considering Douglas—a famously homicidal terrorist—was a central figure in Robert’s story. Still, Taylor-Johnson appropriately portrays him as a frothing-at-the-mouth berserker.

Fans of Scottish history will find plenty to enjoy (and argue about) here. While not quite on the same level as all-time greats like Gladiator, Outlaw King makes for a respectable addition to the genre. With picturesque scenery and an engaging underdog hero, it provides an antidote to the onslaught of relentlessly gritty historical action flicks.